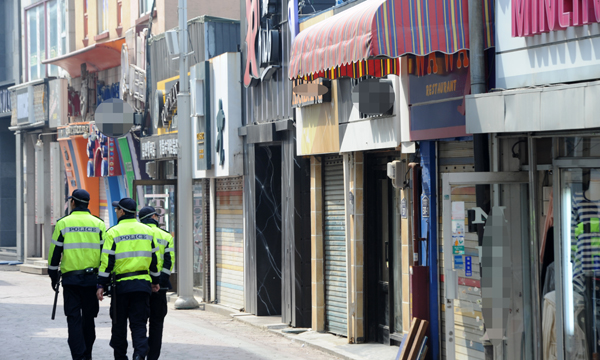 Policemen patrol the special tourist zone for foreigners in Dongducheon, Gyeonggi, yesterday. An armed scuffle broke out between soldiers from U.S. Forces Korea and a resident in the neighborhood Saturday, and an American soldier was stabbed during the fight. It was one of the latest in a series of brawls involving U.S. soldiers. [NEWS 1]

U.S. soldiers were arrested in three separate incidents over the weekend for drunk and disorderly conduct and one Korean man is being held for stabbing a soldier, according to police.

In the first incident, an 18-year-old soldier from the Dongducheon base in Gyeonggi is accused of tussling with a police officer surnamed Moon from the Mapo Police Precinct in western Seoul at a bar in Seogyo-dong at about 3:15 a.m. yesterday.

Moon was responding to reports of a disturbance in the restroom, and the solider punched the policeman in the face while being forcibly removed from the location. Moon’s glasses were broken and his uniform torn.

About two hours later at 5:10 a.m., a 29-year-old U.S. Air Force sergeant based in Seongnam, Gyeonggi, quarreled with a Korean civilian on the street in Hongdae, western Seoul. He was taken to an auxiliary police station in Seogyo-dong and once there pushed a police officer who tried to send him home.

The solider shoved the officer, surnamed Ryu, down the stairs when Ryu tried to block him from re-entering the building. Ryu banged his knees and the entrance door was damaged.

Both soliders are to be charged with interfering with the duties of a public official as well as breaking public and personal property.

“We questioned the soldiers about the disturbances, but since the cases are not very serious, we are not considering expanding the investigations,” a police spokesman said.

In the third incident, which took place at about 6 a.m. on Saturday in Bosan-dong, Gyeonggi, four soldiers from the U.S. 2nd Infantry Division approached the 26-year-old wife of a Korean-American solider from the same division. The husband became angry, handed a baseball bat from his car to his wife and armed himself with a 33-centimeter (13-inch) knife.

A 32-year-old Korean surnamed Lee, a club owner and friend of the husband, saw the altercation and intervened.

He took the knife and attacked the soldiers, wounding three, including one critically.

The solider with the most serious injury was stabbed in the stomach but later recovered at a military hospital on the U.S. base in Yongsan District, central Seoul.

Police said they will file a detention warrant against Lee and booked all five U.S. soldiers without detention before handing them over to U.S. military police. Officers reported that every soldier was under the influence of alcohol.