Learn the art of compromise

Learn the art of compromise 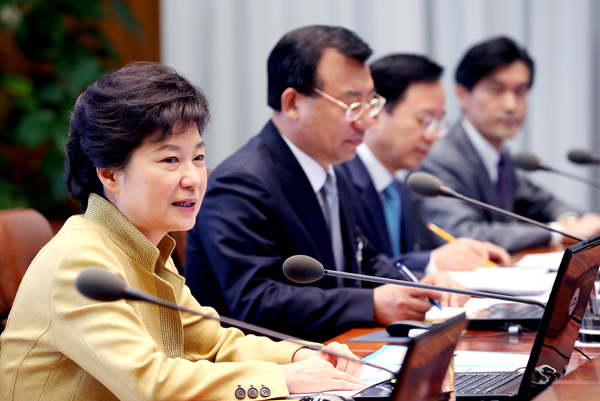 The National Assembly finally reached a settlement over the government organization act after one and half months. While ruling and opposition parties say that they came up with the next best compromise between justification and practical interests, they are interpreting it to their own advantage. Both sides suffered more losses than gains, and the process showed how helpless our politicians are.

President Park Geun-hye had the most to lose. It may seem Park successfully kept her original plan for the operational jurisdiction of the Ministry of Future Planning and Science, but her victory is full of holes. Now, we wonder why she was so aggressive. She could have used some flexibility and given the ruling party discretionary authority in the first place to end the debate without trouble. She remained stubborn until the last minute and had to make more concessions to reach an agreement.

The anticipation for President Park is turning into disappointment. Some are concerned about the next five years. The troubles associated with her appointments have tarnished people’s expectations, and people are disappointed by her self-righteous leadership lacking compromise and concession. Some have rashly said that the voters made a mistake in electing her president.

President Park may feel falsely accused. She must be frustrated that her administration was fettered by the opposition and was not launched properly. She can feel the citizens are being impatient. However, the public sentiment changed constantly, and it is the duty of the leader of a democratic state to comfort the impatient public, persuade the opposition party and compromise. More and more people cynically say, “The clock of Korean politics was turned back to October 27, 1979 - a day after President Park Chung Hee’s assassination,” and his daughter needs to take the criticism seriously.

She has filled more than half of the Blue House and high-ranking government positions with bureaucrats. Seventy-four percent of the ministerial and vice-ministerial appointments went to career bureaucrats. She may find them easy to command as they are accustomed to government organization. The bureaucrats are experts in following orders and delivering what the boss wants.

However, it is unfortunate for the president as well as for the nation to surround her with “yes men.” The president is not omnipotent and needs to have people present her with constructive criticism. She also needs to have trustworthy seniors to consult and get advice. If she had only a few people who could speak straight to her, her appointment decisions wouldn’t have been condemned so harshly. But it seems that she is not willing to listen to others.

Lately, U.S. President Barack Obama is trying a new kind of leadership. He is personally meeting senior opposition politicians to win their support. He invited 12 GOP senators to a restaurant near the White House and picked up the tab. He also invited Paul Ryan, chairman of the House Budget Committee, to a lunch meeting at the White House, as he holds the key to passing bills that can prevent sequestration and fiscal catastrophe. Last week, he visited Congress for three consecutive days and met with Republican and Democrat lawmakers.

Obama has changed because he must have realized that politics was not a game of all or nothing, but an art of compromise and negotiation. President Park must have felt the same as she went through the negotiation over the government organization act.

The Xi Jinping leadership has officially launched in China, and he is supported by a “dream team” that has been recognized for their experience, competency and leadership. Xi cannot lead them by the nose. Second-time Japanese Prime Minister Shinzo Abe also has an “All Japan team,” including his political enemies. Park Geun-hye’s team has to deal with Team Xi Jinping and Team Abe. It is worrisome whether or not the current leadership can compete with their Japanese and Chinese counterparts. The next five years will be a critical time to find a political and economic breakthrough between China and Japan and solve the Korean Peninsula issues, including the nuclear tension.

President Park is at the starting line, and it is too early to give up hope. She could become a successful president who resolves the tasks of the time such as creating new growth engines, attaining economic democratization, establishing a welfare state and preparing a foundation for unification. She can also be remembered as the daughter who completed the industrialization her father started.

Then, she needs to break away from the stubbornness that only her principles and beliefs are right. She needs to communicate and get along with those with different opinions. She must listen to advice that may not please her and embrace the opposition’s standpoints if necessary. If she cannot shake off the self-righteous image and fail to make a drastic transformation, people may soon miss the days of President Lee Myung-bak.