Large discount chains are living up to their name

Large discount chains are living up to their name 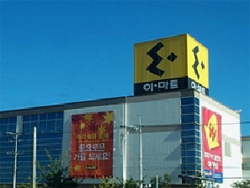 Large discount chains are springing into action after President Park Geun-hye cited improvement of the country’s distribution system as crucial for price stabilization during her March 13 visit to Hanaro Mart in Yangjae-dong, southern Seoul, last Wednesday.

After rolling out discounts on pork and hanwoo, Korean beef, on Monday in line with urgent calls from the Ministry for Food, Agriculture, Forestry and Fisheries, the chains are holding bigger sales events.

To celebrate its 15th anniversary April 1, Lotte Mart cut prices of daily necessities by up to half for five weeks from yesterday through April 24, the retailer said Tuesday.

Ultra Stretch Jeans, leggings made with denim, are available for 19,800 won. The retailer also offers 3,000 won discount coupons through Kakao Talk to those who become friends with Lotte Mart.

Together with these, Lotte Mart offers 800,000 won range stone bed at its 70 stores in cooperation with Jangsoo Stone Bed.

Customers can receive an additional 10 percent discount if they make pay with Lotte or KB Kookmin cards.

In addition, given the current consumption slowdown, Lotte Mart cut the prices of seasonal food and household goods by half and replaced its giveaways with more practical items like eggs and noodles.

The country’s largest discount store chain, E-Mart, has also been holding sales throughout the month, discounting 2,000 products by as much as 63 percent.

Homeplus has been holding the largest sales event since the beginning of March, moving up anniversary-related events that had been scheduled for May.