With six a day, concert fans clamor for less variety

With six a day, concert fans clamor for less variety

Music enthusiasts may be puzzled to find out that four major events - the Seoul Jazz Festival, Green Plugged Seoul, Jarasum Rhythm and BBQ Festival, and the World DJ Festival - all start on May 17. Korean favorite Jason Mraz is also holding a concert on the same day.

The packed schedule is a sign of the country’s growing concert industry, which is good news for organizers who benefit from higher ticket sales. But there are also signs that Korea’s event schedule is simply becoming too full, leaving some acts to get lost in the crowd.

In 2010, ticket sales for concerts stood at 76.1 billion won ($68.2 million), and that figure increased by a whopping 140 percent in the following year to 182.6 billion won. While initially the success put smiles on industry officials’ faces, the feeling of elation was quickly replaced with nervousness that the trend might not continue.

In 2003, the country’s record market was as big as 400 billion won but shrank drastically to 180 billion won due to illegal Internet downloading. 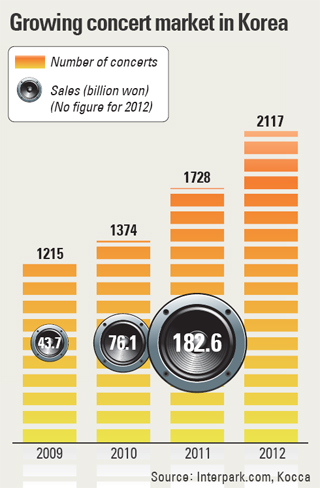 The crumbling of the record industry actually helped launch concerts’ success. In 2006, concerts raised about 24 billion won, and five years later, that number had increased 7.6 times to 182.6 billion won.

But there is fear that the industry may collapse just as music records grew unprofitable.

“Considering the size of Korea’s music market, it is enough to have just one music festival. The excessive competition is making organizers struggle and giving concertgoers a hard time in deciding which one to attend,” said Song Ki-cheol, a music critic.

Fiercer competition is making it difficult for concerts to turn profits as more people jump into the business.

According to Interpark, the country’s largest online ticketing site, the number of concerts suddenly surged from 1,215 in 2009 to 2,117 in 2012. On average, that’s six concerts a day.

“The industry was growing at full speed until last year when some problems began to emerge,” said one official from a production company. “There are many concerts to choose from, and fans began to feel weary of having too many options.”

Top stars are already starting to demand higher fees for performing in Korea. One source said that financial guarantees paid to top acts in Korea recently surpassed those paid in Japan, the world’s second-largest market.

For example, Maroon 5 received a guarantee of about $900,000 per concert in Korea in 2009, and when it returned the following year, it received $1.3 million for two events.

Hyundai Card’s “Super Concert” is one of the reasons behind such increases in guarantees for major artists from abroad. Hyundai Card has deep pockets, but inviting such artists became impossible for other production companies with less influence and fewer sponsors.

Faced with rising costs, production companies have raised ticket prices and are turning to music festivals since a nearly unlimited number of tickets can be sold for these events.

“We try to focus more on organizing a music festival than a one-time concert as there are more revenue opportunities in holding music festivals,” said an official from the Ultra Music Festival, which attracted about 80,000 people last year.

There is a clear trend toward bigger events, according to Interpark.

“This year, the number of music festivals and large-scale concerts [is] increasing while the number of midsized concerts is decreasing,” said Park Jeong-soo, an official from the company.

But it’s not as easy as it sounds for a music festival to make a profit.

It was only last year that the popular Jisan Valley Rock Festival surpassed the break-even point for the first time by attracting 100,000 people. And even then, the large-scale event organized by CJ E&M made only 100 million to 200 million won.

“Not only us but all festival organizers know that it is difficult to make a profit just with ticket sales,” said an official from CJ E&M.

And the increased options have concertgoers just as frustrated, albeit for different reasons.

“Up until this year, I went to the Green Plugged Seoul and then to the Jarasum R&B Festival, and of course, I never missed a single Mraz concert because I’m a big fan of his as well,” said Kim Hye-kyung, 31. “But after looking at the list of music concerts and festivals scheduled for this year, I just got a headache.”