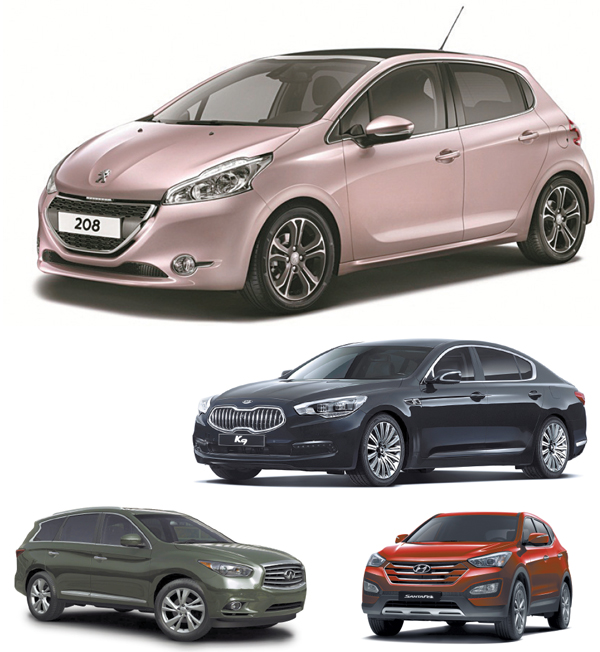 
Size doesn’t always matter. Peugeot 208, the compact hatchback from France, has won the 2013 Car of the Year (COTY) award given by the JoongAng Ilbo.

Entering its fourth year, this is the first time a small-size foreign model has claimed the top award.

After a month of judging, the 2013 COTY will hold an award ceremony at Lotte Hotel in Sogong-dong, central Seoul, today to honor the Peugeot 208 and other selected models.

The Infiniti JX took the innovation award, while Lexus ES300h was selected as the most user-friendly car.

The innovation award was created in a bid to promote creative ideas in the auto industry, while the user-friendly award evaluates how various convenient features are designed and installed to best suit drivers and passengers.

Porsche 911 and Toyota 86 shared the top prize in the best performance category. For design of the year, Renault Samsung Motor’s SM3 was the best among local cars, while the Audi S7 stood at the top among imports. The BMW 3 Series bagged the top environmentally friendly car.

In the first stage of screening, 15 judges reviewed 63 automobiles that were introduced in Korea last year and trimmed the COTY candidates down to 16. After a test drive session and further evaluation, they picked the winners of the seven categories on March 13.

The COTY award is designed to consider both local models and imports. If the top prize goes to foreign-made models, the judges need to select the best local-made car or vice versa. 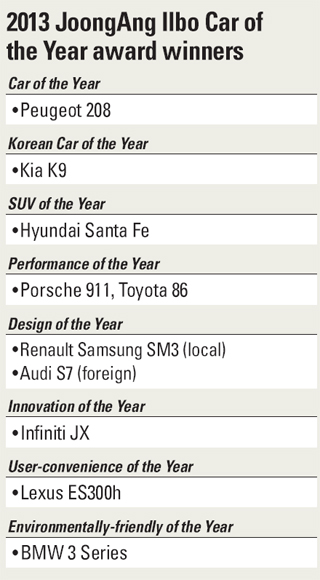 The 2013 winner Peugeot 208, which was introduced in Korea last November, is the most fuel-efficient car in Korea. Its 1.4 e-HDi model can go 21.1 kilometers per liter (50 miles per gallon). Judges evaluated this model as “the little giant that highlights the best fuel economy and interior design.”

“Even though it has more than 150 kilograms [330 pounds] less body weight than its previous editions, the vehicle has a good grip on the road when driving,” said judge Na Yun-seok, former product manager of Volkswagen Korea.

Because of its Mechanical Compact Piloted, or MCP, gearbox, a type of automated manual transmission that doesn’t require a clutch pedal, some judges have pointed out they felt some impact when changing gears, but this wasn’t a major detractor.

“Its interior design has a focus on texture, and its French uniqueness is also a positive,” said judge Koo Sang, an industrial design professor at Hanbat National University.

The Peugeot 208 already earned a solid reputation in Europe, being selected as the best car in Ireland and Spain. It was also a finalist for the European COTY last December. Even though it’s a small car, the model has received five stars in the European New Car Assessment Program, highlighting its safety.

Judges were split on the design of the K9, which is known as Quoris overseas. Some said it resembles some foreign luxury models and lacks unique characteristics, while others disagreed. However, most judges pointed out that there are too many convenient features, which drive the price too high for local consumers.

Hyundai Santa Fe, which was named the best SUV, was judged to not only succeed in the local market, but also overseas. In the best SUV category, the third-generation Santa Fe was the only local model, competing against Audi Q3, Mercedes-Benz ML350 and Infiniti JX.

Judges said that its convenient features are abundant considering its price, which ranges from 27 million won to 33 million won, and its agile body design is also a plus. However, most judges criticized that its steering is unstable when traveling at higher speeds.

Meanwhile, the Santa Fe was the fan favorite. In the 2013 COTY online voting, which is separate from the judges’ evaluation, netizens picked Santa Fe with 42.2 percent, beating the Kia K9 which earned 26.6 percent. More than 10,000 people participated in the online voting.

For best design, Renault Samsung Motor’s compact sedan, SM3, took the honor among Korean cars. Although some judges pointed out that it looked too much like “a car for a middle-aged woman,” it received high points for a roomy interior and a design that appeals to compact car lovers.

“The SM3 is suitable for a family sedan,” said judge Lee Nam-seok, a business administration professor at Chung-Ang University. “Its inside features are comfortably positioned and easy to operate.”

Audi S7, the premium edition of the Audi A7 sportback, was expected to win a prize in the best performance category with its 420 horsepower and 56.1 kilogram meter torque, which also enables zero to 100 kilometers per hour in just 4.7 seconds.

But as the brother model of the design-acclaimed A7, it received top points in design among 16 models.

“I felt that this car presented everything that Audi can do in design,” said judge Jang Jin-taek, a former Kia Motors designer who now works for Car Media.

For best performance, judges honored both the Porsche 911 and Toyota 86.

The seventh-generation model Porsche 911, which has 400 horsepower with 44.8 kilogram-meter torque, used high-tech material to reduce its body weight.

Some judges didn’t like that newly added features altered the original quality of the 911, but in general, many agreed it succeeded to keep the model’s sporty reputation that began in 1963.

Toyota 86 is a rear-wheel drive based sports car that is the result of collaboration between Toyota and Subaru. The model only has 200 horsepower, but judges praised its sporty driving performance.

“Its design in terms of seat, engine and sound all stands out for the purpose of driving,” said judge Hwang Soon-ha, UL Korea CEO who previously worked for Kia and Daewoo.

“Not many cars will deliver this much fun in the 30 million won range,” said Hwang.

The seven-seat SUV from Infiniti, the luxury arm of Nissan, was recognized for answering consumer feedback that called for a family car with comfortable third-row seats.

In addition, Lexus ES 300h, a hybrid, was the best user-friendly car. Judges said that its features, such as navigation, audio and Bluetooth, were easy to operate.

The BMW 3 Series, which is represented by diesel model 320d and gasoline-fueled 328i, received high points and was selected as the best eco-friendly car. The German model earned good marks for fuel economy and emissions as well.