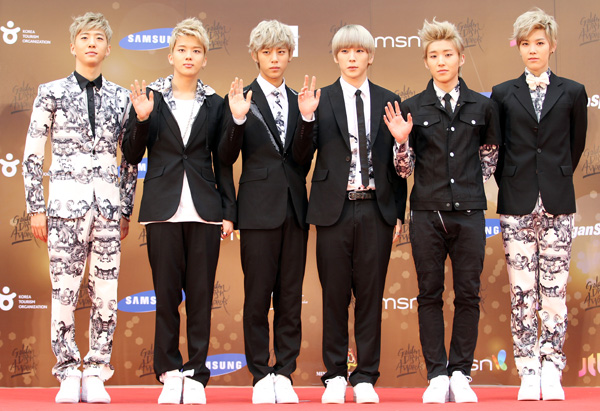 B.A.P has announced that it is going on its first overseas tour only a year after its debut.

It will hold concerts in four cities in the United States starting May 7, according to the group’s agency TS Entertainment yesterday. The American segment was arranged at the request of mobile carrier Verizon, according to the agency.

They will continue to Japan, Taiwan, Singapore and Hong Kong to complete the “B.A.P Live on Earth Pacific Tour.”

B.A.P was ranked No. 1 on Billboard’s world album chart with its new album released last month. The title track “One Shot” also swept many music charts across Asia, including Taiwan and Malaysia, according to local media reports.

Meanwhile, the group will wrap up local appearances on television shows by this Sunday after delivering performances on KBS’ “Music Bank,” MBC’s “Show! Music Core” and SBS’ “Popular Songs.”

It also had solo concerts in Seoul over two days last month that attracted some 8,000 fans.