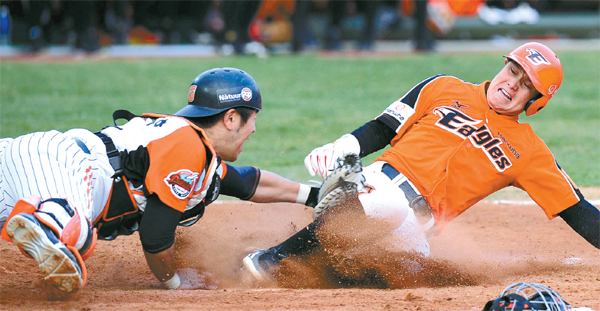 Lotte Giants catcher Kang Min-ho, left, tries unsuccessfully to tag out Lee Dae-soo at Sajik Stadium in Busan yesterday. The Hanwha Eagles second baseman slid home on a Kim Tae-kyun single, tying the game 5-5 in the top of the ninth inning in a Korea Baseball Organization game. The game ended in a 6-5 victory for the Giants on Son A-seop’s walk-off hit in the bottom of the ninth, giving the Giants a two-game sweep of the Eagles in the opening weekend of the 2013 KBO season. Two Seoul teams, the Doosan Bears and the LG Twins, also won both season openers. The Bears beat the defending champion Samsung Lions 7-3 yesterday and 9-4 on Saturday. The Twins defeated the 2012 runner-up SK Wyverns 4-1 yesterday and 7-4 on Saturday. The preseason winning Kia Tigers exchanged a victory and a loss with the Nexen Heroes. [NEWSIS]