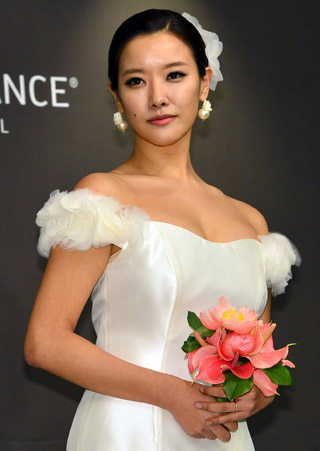 Horan of Clazziquai is single no more, according to the group’s agency.

Horan, the 33-year-old vocalist of the trio whose real name is Choi Soo-jin, married a man three years her senior at the Renaissance Hotel in southern Seoul, her agency Fluxus Music, announced. Few details were revealed about her husband except that he’s employed at a large company in Korea, and the two knew each other for about 10 years before the relationship took a romantic turn last year.

In a media meeting prior to the wedding, Horan said that her fiance proposed during a trip to Spain last summer. She said they went to Sagrada Familia, the famed Antoni Gaudi cathedral in Barcelona.

“There, I received a made-in-Spain ring with the promise that we would come to Spain again when the church is completed,” Horan said.

Veteran singer Kim Chang-wan officiated the ceremony, and Kim Jang-hoon sang a celebratory song. The other two members of Clazziquai, Alex and DJ Clazzi, were also in attendance. By Moon Gwang-lip