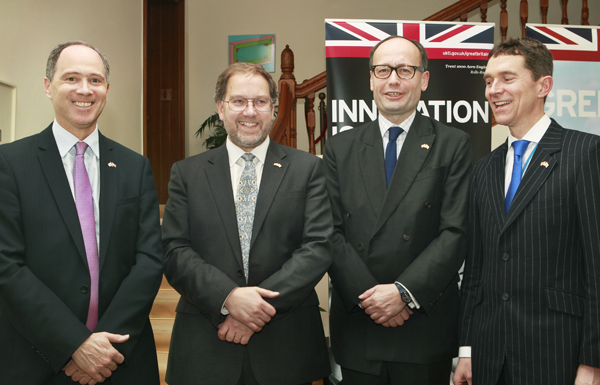 From left: Scott Wightman, the British ambassador to Seoul, stands with Robin Grimes, the British Foreign and Commonwealth Office’s chief scientific adviser, Neil Morisetti, special representative for climate change, and Andrew Mitchell, the office’s prosperity director, at a reception last week. The envoys from the U.K. participated in the International Conference on Climate Security in the Asia-Pacific Region held on March 21 and 22 in Seoul. By Park Sang-moon

Ahead of an international climate conference hosted in Seoul last month, the British Foreign and Commonwealth Office’s new chief scientific adviser stated that he sees great potential in the partnership between the U.K. and Korea in clean energy.

“Korea is showing the world how nuclear energy can be delivered on time and on budget, so Korea has the manufacturing capabilities and expertise to really push forward the manufacturing agenda for clean energy, and there’s a tremendous market and opportunity for Korea,” Robin Grimes told the Korea JoongAng Daily on March 20 at a reception before the third International Conference on Climate Security in the Asia-Pacific Region held March 21-22.

Grimes was accompanied by the British foreign secretary’s special representative for climate change, Rear Admiral Neil Morisetti, and Andrew Mitchell, the foreign and prosperity director, on a three-day visit to Seoul from March 20 to address global low-carbon innovation and resource security challenges.

The two-day conference, supported by the UN Economic and Social Commission for Asia and the Pacific and the Korea National Diplomatic Academy, was attended by some 130 senior-level officials, experts and environmental organizations.

Attendees included Pithaya Pookaman, Thailand’s vice minister of natural resources and environment, and Christiana Figueres, executive secretary of the UN Framework Convention on Climate Change. In addition to his government position, Grimes is a nuclear energy specialist and a professor of material physics at the Imperial College London.

Together, they discussed a wide range of issues from climate change’s impact on food and water supplies to coastal stability and migration. The three envoys from the U.K. also met with officials from the Ministry of Environment and the Blue House during their trip as well as academic experts in the areas of energy, economy and green growth.