Are you an Android or iPhone type?

Are you an Android or iPhone type? 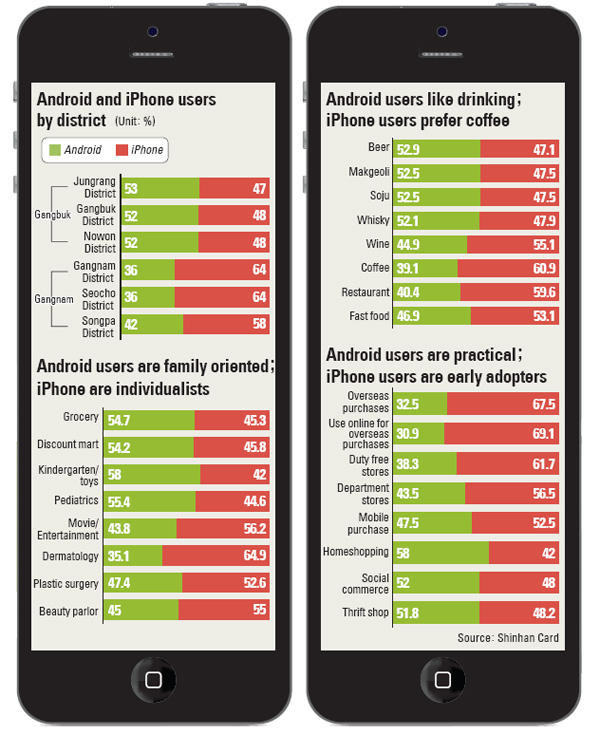 Lee Hyeon-joo, who is 33 and single, visits a dermatologist every month and stops by the beauty parlor to do her hair when she needs a mood change.

She enjoys musicals and buys her tickets online. Lee is an early adopter who has to have the latest IT products as soon as they are released overseas.

So what smartphone does she own? The iPhone 5, of course.

Kim Joon-seon is 35 and married with two children. He visits a pediatrician frequently because his 5-year-old often gets sick. Last month alone, he made three trips to the hospital.

Kim frequents a nearby discount store with his wife and relieves stress by sipping beers with friends. Kim uses a Galaxy Note 2 with the Android operating system.

A recent study by Shinhan Card showed there is a distinctive difference between users of Android phones and iPhones.

The study was based on analyzing 200,000 people aged between 20 and 40 living in Seoul and Gyeonggi regions on their spending patterns.

“The analysis was not only based on the credit card spending of the customers, but also the apps they use,” said a Shinhan Card official.

“Users of iPhones tend to be more sensitive to trends then Android phone users, and they were more aggressive in investing on themselves.”

The study showed that like Lee, Apple users tend to spend mostly on themselves for such things as grooming and entertainment, while Android users like Kim tend to spend more on their families, such as groceries and children’s toys.

The report also showed that a majority of iPhone users lived in Gangnam, southern Seoul, while Android phone owners were mostly located north of the Han River.

They also tend to spend relatively more on chicken and beef when drinking alcohol than iPhone owners. In fact, 52 percent of the Android phone users swiped their credit cards to purchase alcohol.

When it comes to alcoholic beverages, wine was the only one bought by a greater percentage of iPhone users (55 percent) than Android users (44.9 percent).

They also were more likely to eat at restaurants and buy fast food than Android owners.

In purchasing goods iPhone users were early adopters, with a greater tendency to purchase the latest products online or while traveling abroad.

It is estimated that there are more Android phone users than iPhone owners.

According to a survey last year by Dooit among 4,303 people using smartphones, 68.4 percent turned out to own an Android phone while 13.3 percent owned Apple’s iPhone.

Men preferred Android phones as they accounted for 78.8 percent of users. Only 14 percent of men in the survey said they own an iPhone.

Nearly 64 percent of women owned an Android phone while 12.9 percent owned an iPhone. Women had stronger preference for other smartphones that run on other operating system to that of Apple’s iOS.

The survey, however, showed that while there was no specific age group that preferred Android phones, the iPhone attracts younger consumers.

The statistics are subject to change as iPhone 5 started selling in December.