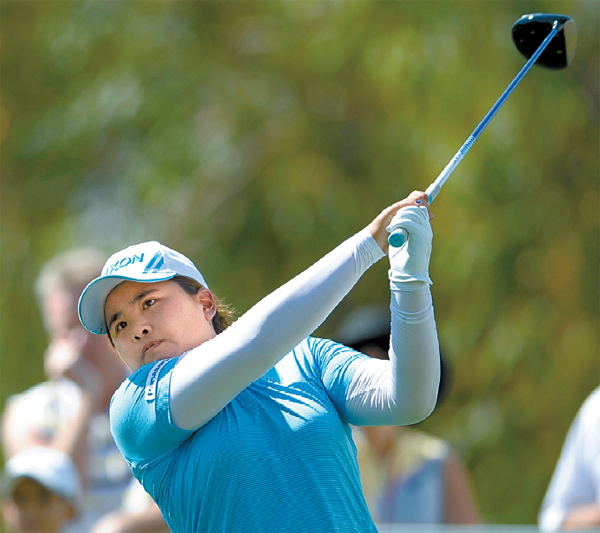 Park In-bee follows her tee shot on the ninth hole Saturday during the third round of the LPGA Kraft Nabisco Championship in Rancho Mirage, California. [AP/NEWSIS]

RANCHO MIRAGE, California - Park In-bee had a bogey-free round Saturday to open a three-stroke lead going into the final round of the Kraft Nabisco Championship.

The Korean bolstered her lead with a birdie at the 17th hole, putting her tee shot within three feet of the pin, as her nearest rival Lizette Salas found a bunker.

“It was actually a little bit of a mis-shot,” Park said. “I aimed a little more right, but I slightly pulled it and it ended up perfect.”

Bogey-free in her last 22 holes at Mission Hills, Park shot her second straight five-under 67 in tricky wind conditions to reach 12 under.

“I feel really good about my swing and stroke at the moment,” Park said. “I feel really comfortable around this golf course, too. That helps. Three good rounds, and I just need another one tomorrow.”

She’s in position for her second major title and second victory of the year. She won the 2008 U.S. Women’s Open and added her fourth LPGA Tour title in February in Thailand.

“This one would mean a lot,” Park said. “It’s just been a tournament I always wanted to win and, with the special ceremony jumping in the water, everybody just wants to do that.”

Salas, a stroke behind Park entering the round, had a 69 to remain second.

“I’ve just got to stay patient and just trust my putter and just keep it simple,” Salas said “I’m just going to stick to my game plan. I can’t control what she does. I can only control my swing thoughts and my routine.”

Hall of Famer Karrie Webb, the tournament winner in 2000 and 2006, was five strokes back at 6 under along with Suzann Pettersen, Angela Stanford, Jessica Korda, Karine Icher and Pornanong Phatlum. Stanford had a 66, the best round of the tournament. Webb and Pettersen shot 67, Korda and Icher 68, and Phatlum 70.

Park matched Salas with a birdie on the par-4 opening hole and got to 9 under with a 25-foot birdie putt on the par-3 ninth.

Park stretched her advantage to two strokes with another 25-foot birdie putt on the par-4 10th, then nearly holed her 9-iron approach on the par-4 12th, leaving only 2 feet for another birdie that pushed the lead to three.

Salas pulled within two with a birdie on the par-4 13th, but Park countered with the birdie on 17. Salas managed to save par on 17 after hitting into the bunker, then missed a chance to get closer on the par-5 18th when her 6-foot birdie attempt slid by to the right.

“I wasn’t hitting the ball as well as the first two days, but I kept putting myself in good position, hit some good shots out of the rough, and hit a great bunker shot on 17 to get up and down for par,” Salas said.

Stanford rebounded with the 66 after opening with rounds of 70 and 74.

Michelle Wie had a 73 to drop to 1 under. She has broken 70 only once in 17 rounds this season and is using an unorthodox putting stance with her torso bent parallel to the ground,

Top-ranked Stacy Lewis was one under after a 71.

“Coming into the week my swing didn’t feel great and I was kind of hoping I would figure things out by now, but I just haven’t,” said Lewis, the 2011 champion.

She has struggled after winning consecutive events this year in Singapore and Phoenix to take the top spot in the world from Yani Tseng.