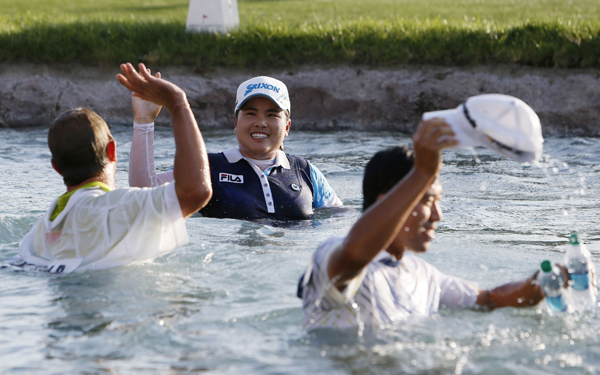 RANCHO MIRAGE, California - Any drama left Sunday at Mission Hills was gone a few minutes after the final group teed off.

Robbing the Kraft Nabisco Championship of another exciting finish, Park In-bee doubled her lead to six strokes over playing partner Lizette Salas on the par-4 opening hole and ran away with her second major title.

Park made a 20-foot birdie putt, showing off a putting touch unmatched in women’s golf, and Salas had a messy double bogey for a three-stroke swing.

“That made my day much easier, that’s for sure,” Park said.

The 2008 U.S. Women’s Open winner at Interlachen, Park closed with a 3-under 69 to finish at 15 under, four strokes ahead of fellow Korean player Ryu So-yeon.

“It had been a while since I won a major. It feels very special,” said the 24-year-old Park, the third straight Korean major winner and the eighth in a row from Asia.

Park celebrated the victory with the traditional leap into Poppie’s Pond.

“It was great,” Park said. “That’s the pond I’ve always wanted to jump in, and I finally jumped in. It was a little bit chilly, though.”

She also jumped from fourth to second in the world with her fifth LPGA Tour title and ninth worldwide win.

“I only have one more spot to go,” Park said.

She filled a water bottle in the pond.

“That was for my dad,” Park said. “When I see him next week in Hawaii, I’m going to pour it over him. Yeah, that’s what he wanted.”

She stopped him from making the trip from Korea to California.

“He packed his bags and booked a ticket and everything and he was on his way,” Park said. “I called him and, like, said, ‘Just don’t come.’ He was very mad because he really wanted to come. But really it was tough stopping him, but he actually listened to me. ... I stopped him because if he came, I would want to win so bad, but that might be on my mind playing today.”

Park has four victories in her last 16 events. She won the LPGA Thailand in February in her season debut when Ariya Jutanugarn closed with a triple bogey to blow a two-stroke lead.

“I’ve played five tournaments on the LPGA Tour and I’ve won two of them, which is a very good start,” Park said. “It’s pressure off me for the rest of the season.”

Last year, Park won twice, had six runner-up finishes and topped the money list. She won the Evian Masters in July in France, tied for third in her next start, added three straight second-place finishes and capped the run with a victory in October in the LPGA Malaysia.

“I’ve seen In-bee do this before,” top-ranked Stacy Lewis said. “I played with her at Evian last year when she had, I think, 22 or 23 putts in the final round. When she rolls it, you can’t beat her.” AP