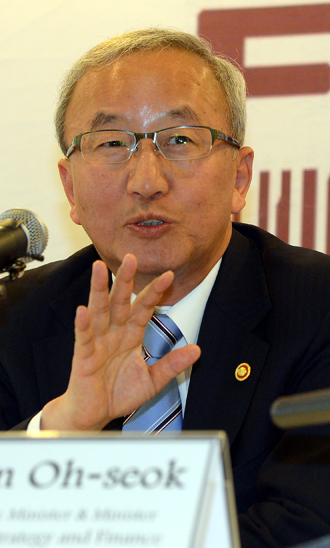 As the yen further weakens to about 100 against dollar from the current 90 range spurred by the Bank of Japan’s aggressive currency easing measures, market observers predict that Korean exporters that compete directly with Japanese rivals or companies that export most of their products to Japan will be hit hard.

Samsung Securities said in a report yesterday that Korea’s top listed 43 companies’ revenue will be cut by 1.81 percent and operating profit by 2.77 percent if the yen depreciates to 110 from 95.

The 43 companies include market cap No. 1 Samsung Electronics and No. 2 Hyundai Motor Group, which together account for 50 percent of the Kospi’s overall market capitalization.

“In the mid- and long-term, the Bank of Japan’s doubling of the money supply will further weaken the Japanese currency to 100 yen by the end of next year and a maximum of 110 by the end of 2015,” said Heo Jin-wook, an analyst at Samsung Securities.

Heo said Hyundai Motor and Kia Motors’ operating profit would dip by 1.31 percent and 3.88 percent, respectively, while Korea’s top steelmaker Posco will see its operating profit fall 3.47 percent if the yen depreciates to 110 to the dollar from 95.

Yesterday, the yen dropped to its weakest level since June 2009 on growing expectation by market observers that the Bank of Japan’s aggressive measures to combat deflation announced on Thursday will continue to lower the value of the currency against the greenback. 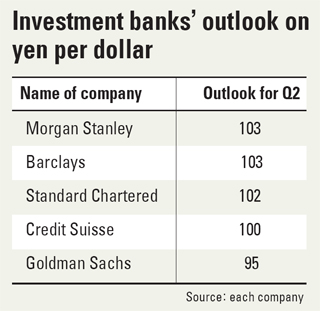 The Bank of Japan said on Thursday that it will increase its monthly bond purchases to 7.5 trillion yen.

“At this pace, it is likely that yen could reach the 100-something mark as soon as April or within the second quarter,” said Park Hyung-joong, an analyst at Meritz Securities.

“The exchange rate should be determined by economic fundamentals, supply and demand and the government interventions are not desirable,” Hyun said yesterday.