Ryu does it all, leads Dodgers over D’backs

Ryu does it all, leads Dodgers over D’backs 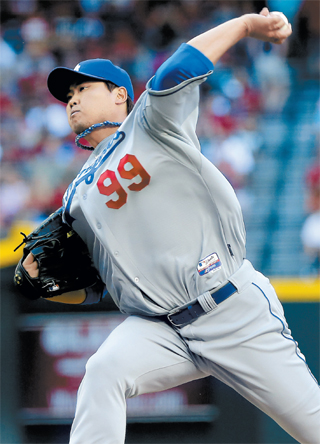 PHOENIX, Arizona - With his parents and a contingent of Korean students from nearby Arizona State cheering him on, Ryu Hyun-jin had the biggest night yet in his young major league career.

Not just on the mound. At the plate, too.

The left-hander struck out nine in six innings and got his first three big league hits as the Los Angeles Dodgers held off the Arizona Diamondbacks 7-5 Saturday.

“I can’t remember,” Ryu said through an interpreter when asked the last time he had three hits in a game. “Even in high school, I don’t think I got three hits in one game.”

Adrian Gonzalez went 3 for 4 with a home run and two RBIs as the Dodgers stopped a six-game losing streak in Arizona dating to last season. Matt Kemp singled in two runs, Skip Schumaker had an RBI double and Andre Ethier singled in a run for Los Angeles.

The Dodgers led 6-1 after six innings, but Arizona tried to rally behind pinch-hit RBIs from Eric Hinske, Eric Chavez and Aaron Hill, and a home run by Martin Prado.

“He has good stuff. He has four pitches, and he throws them at any time,” Arizona’s Paul Goldschmidt said. “He located his fastball on both sides of the plate. He used his changeup. He has a little curveball and a hard slider. He was mixing it up and keeping guys off balance.”

It was Ryu’s 100th professional victory. He said his parents have been there “for 99 of them.”

His parents jumped up and down when he doubled in his first at-bat. He also had two singles, becoming the first Dodgers pitcher with three hits in a game since Randy Wolf went 3 for 4 against Arizona at Chase Field on Aug. 16, 2009.

Ryu expects to succeed on the mound, which Dodgers manager Don Mattingly noted from the day the pitcher arrived.

“I’m sure he has still lots of things to deal with as far as the culture and the language and a lot of things,” Mattingly said. “But the pitching part, he came in with that, and that confidence has been there since day one.”

The hitting was another matter.

“I was most surprised by my hitting today,” Ryu said. “Surprise is the key word.”

Brandon League pitched a perfect ninth for his fourth save in as many tries.

Arizona’s Ian Kennedy (1-1) gave up six runs and 10 hits in 5 ?and two-thirds innings, striking out four and walking four, one intentionally.

The Diamondbacks’ Cliff Pennington was ejected for the first time in his big league career after slamming his bat on the plate following a called third strike by umpire Jim Reynolds with runners on first and second in the seventh. The bat broke, and Pennington went back and picked up the shattered piece before he left the field.

Arizona went on to score two runs in the inning and close to 6-3. Prado’s homer off Kenley Jansen leading off the eighth made it 6-4. Miguel Montero singled with one out and Hill, out of the lineup since being hit in the left hand by a pitch on Tuesday, doubled to deep left with two outs to make it a one-run game.

Ramon Hernandez’s RBI double down the right-field line in the ninth boosted the lead.

Gonzalez led off the fourth with his second home run of the season, then the Dodgers added two in the fifth. Ryu singled, then Crawford reached on a fielder’s choice and flew around the bases to score from first on Schumaker’s double. Gonzalez was walked intentionally, then Ethier singled sharply to bring home Schumaker with a 3-0 lead.

Arizona scratched one across in the fifth when Pennington led off with a single, took second on a wild pitch, advanced to third on Kennedy’s sacrifice and scored when A.J. Pollock grounded out.

Los Angeles chased Kennedy in a three-run sixth, with all the damage coming with two outs. Ryu singled and Carl Crawford doubled to put runners at second and third. Schumaker walked to load the bases, then Kemp - batting .189 entering the game - singled in two runs.

Left-hander Matt Reynolds replaced Kennedy and gave up an RBI single to Gonzalez, putting the Dodgers up 6-1.

Ryu left after giving up singles to Alfredo Marte and Josh Wilson to start the seventh.

Reliever Ronald Belisario got Pennington out on strikes, but pinch hitters Hinske and Chavez each singled in a run to cut it to 6-3.