New Glass opera debuts with music for ‘Lost’ ones

New Glass opera debuts with music for ‘Lost’ ones 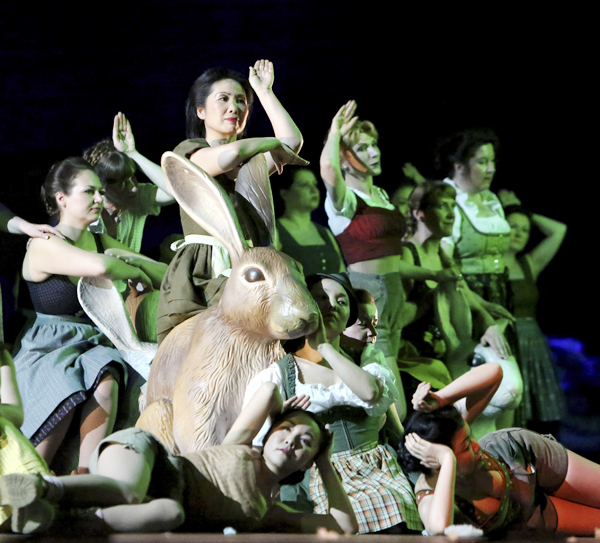 The choir of the Philip Glass opera “The Lost.” [AP]

It’s a term Philip Glass never liked as a term for his musical style, and the rich complexity of “The Lost,” his newest opera, proves those who insist on using it just plain wrong.

Written for the new Linz opera house, where it world-premiered Friday, “The Lost”- “Spuren der Verirrten” in the original German - is a strangely reassuring confirmation that although mankind has gone astray we are all in the same boat; that while all we do has no sense, that rule applies to all of us.

Life; death; fame; fortune; joy; tears. All human striving in vain. It’s a story that has been told many times, in word, music, song and dance. “The Lost” combines all those threads and then some with magnificent result in what in some ways combines Samuel Beckett’s “Waiting for Godot,” and Fritz Lang’s “Metropolis.”

Don’t look for named characters. That would be too personal. Instead we have singer “A’’ interacting with “B’’ and so on. The fact that “A’’ and “B’’ are lost is clear from the very start, even as they mark the way they came.

Hansel and Gretel did that too. In vain.

Two hours later, pause included, more than a hundred people crowd the cavernously deep stage and spill into the pit where they make a show of playing imaginary instruments. The orchestra has moved onto stage. They wear funny hats and conductor Dennis Russell Davies sports a paper crown.

The music soars to a crescendo. Drums pound. All of humanity is lost, and all around is chaos. “Where are we?” they sing on the sinister, red-lit stage, knowing there will be no answer.

But a lot happens before that sonorous end, as one tableau follows the other depicting vignettes of the banality of being.

An old couple sit, both soaking their feet. “Whatever happens I will never desert you,” sings one. “We’ve come through tougher times than these,” intones the other; “Even when you sweated in fear, it smelled good” - exchanges that make clear in their triteness that it is the audience - all of us - who are on stage.

Another couple are fighting, “Die, die,” screams one before changing tack in midbreath to suddenly sing, “Let’s get along again, neighbor. Peace.” Bizarre shapes populate the action. An armless man moves wormlike across the stage as his partner berates him for failing life’s tests. They both die.

Another character - “The Third” - takes on the role of the Greek chorus loudly proclaiming the futility of it all, while “The Spectator” wonders where all the exertion is leading.

Adding to the onstage edginess is nervous ballet choreography. The dancers jerk and move rapidly but without a sense of the purpose that a life lived well should have. The motions are mechanical. Life is mechanical.

But none of it would work without Glass’s music. Menacingly buzzing strings, roaring brass instruments and a crashing synthesizer alternate with poignantly melodic lines. Glass is boldly symphonic in one moment, softly insistent the next, weaving a harmonic tapestry that becomes part of the visual fabric on stage.

One of the world’s greatest living composers, Glass shows in “The Lost” that he’s a man for all musical seasons and his wonderful sounds are brought alive by Davis, the conductor, who leads Bruckner Orchestra with the authority and vigor this music demands.