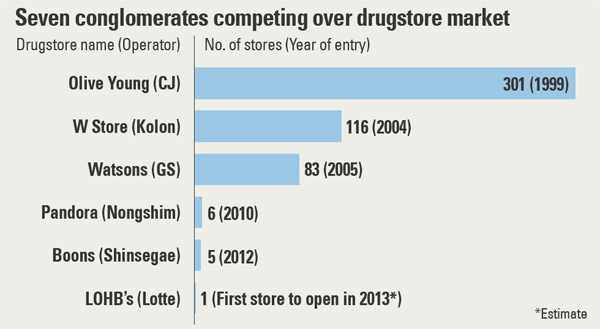 Conglomerates are waging a drugstore war in the Hongdae commercial district near Hongik University in Seoul, where retailers have jumped into the market to compete with the industry’s top two brands, Olive Young of CJ and Watsons of GS, which operate three stores each.

Starting with the launch of Shinsegae’s Boons in December, other conglomerate-owned drugstores that have opened are Pandora of Nongshim and About Me of Samyango. In addition, Lotte said Wednesday it plans to open its own drugstore, LOHB, specializing in cosmetics next month.

The commercial area in Hongdae, best known for art and nightclubs, has a large number of women and is a prime location for drugstores selling cosmetics and accessories.

While drugstores in other countries, such as Walgreens in the United States and Boots in the U.K., are more like general stores that sell food and personal care goods, the ones in Korea mainly sell cosmetics.

It is an attractive business area for conglomerates, as drugstores are not subject to government regulations restricting the number of stores and imposing mandatory holidays in order to boost mom-and-pop stores and traditional markets.

Also, after deregulation of sales of pharmaceutical products in 2011, the realm of the business widened. 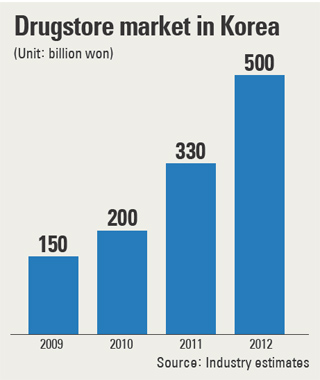 “It is a difficult business area to jump in for anyone except large corporations, as you need to have at least 150 stores nationwide to be competitive. Also since they should open in super commercial areas, it makes the initial investment cost and rent extremely burdensome,” said an industry insider.

As the number of new stores increase, existing drugstores are scrambling to compete by holding sales events. But the newcomers also are offering additional products and services.

At some of its stores, Boons sells prescription drugs, operates skin care and hair salons and offers massages. Pandora increased hired professional pharmacists at all of its branches.

A spokesman for Lotte, which plans to enter the drugstore market, said the company is focusing on sophisticated and luxurious stores.

Meanwhile, there are concerns the drugstore market may be getting too crowded.

“It is known that most drugstores are losing money except for Olive Young, which entered the market in 1999,” said an industry official, adding that it can take several years to turn a profit.

Within the industry, there is also widespread anxiety over the possibility that drugstores could become subject to government regulations. As they also retail processed foods and personal care goods, they are increasingly being accused of threatening the businesses of small pharmacies, cosmetics stores and mom-and-pop supermarkets.

“We plan to focus on expanding into China, opening the first Shanghai store in the first half of the year,” said Olive Young.

Even with the boom of late, another industry observer says there is ample room for growth in the Korea’s drugstore market.

“These big corporations are only walking on eggshells for a while due to the recent mood for government regulation of conglomerates,” he said.