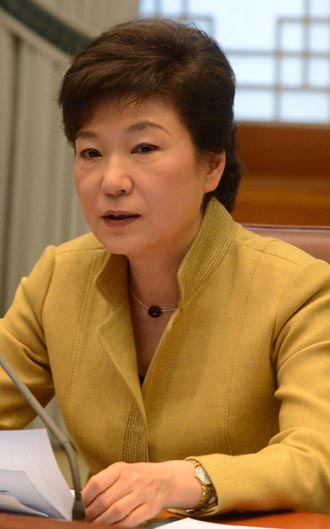 President Park Geun-hye yesterday pressed conglomerates to expand investments as a way to pump cash into the moribund economy.

“For economic recovery, corporate investments are very important,” Park said yesterday at a meeting of her senior secretaries.

“No matter what the government does to draw up a supplementary budget, there is a limit to the economic recovery if companies don’t make investments.

“Cash reserves and cash-equivalent assets held by the listed companies amount to about 52 trillion won [$46.4 billion],” Park said. “If they invest about 10 percent of the money, it will be similar to the amount of the increased government spending planned under the supplementary budget program.”

Since her inauguration, Park has promoted the importance of empowering small enterprises to realize her vision of the so-called economic democratization and a creative economy.

It was the first time for Park to pressure conglomerates to spend money to boost the slow economy.

Park also ordered her aides to come up with measures to support conglomerates’ plans to expand investment.

“When I met with the heads of foreign chambers of commerce and CEOs of major foreign companies last week, I promised them that I would create a favorable investment environment,” Park said.

“We should, of course, do the same for Korean companies. The Ministry of Strategy and Finance and other relevant ministries must quickly prepare for measures to support the companies’ investments.”

Park also said it is important to ease regulations to encourage investments in future growth engines, stressing that it doesn’t go against her vision of economic democratization.

“Whether it’s a large company or a small company, we should actively support an earnest investor,” Park said. “Suppressing them is not a government’s job nor is it economic democratization.”

She also said the government will push forward with economic democratization to support hard-working small companies, while paying attention to changing regulations so that conglomerates can make bold, large-scale investments in future growth engines.

A recent report by a corporate information provider showed that Korea’s top conglomerates had kept a record stockpile of cash.

The amount of liquid assets held by Korea’s top 10 conglomerates was a total of 123.7 trillion won in 2012, according to a report by Chaebul.com issued earlier this month.

The data was an analysis of the financial status of 83 listed companies under the conglomerates through December 2012.

It found that the companies held a combined 46.9 trillion won, or 38 percent, of liquid assets in short-term financial instruments. The remaining 76.8 trillion won was in cash reserves.

The high level of liquid assets indicates a reluctance to invest in new projects.

“Companies balance investments and their liquid assets depending on market conditions, and they make investments based on supply and demand of the industry,” said an executive at a top 10 conglomerate.

“Globally, countries are in a competition to provide support for their companies,” said Bae Sang-geun, an official at the Federation of the Korean Industries.

“The U.S. government, for example, is seeking a manufacturing renaissance, and the Japanese government is trying to improve the profitability of Japanese exporters by adopting monetary easing policies to spur weaker yen. It’s urgent for the [Korean] government to provide momentum to help companies execute their original investment plans smoothly.”

“Some plans on economic democratization being discussed at the standing committee are not parts of my election pledge,” Park said.

“They must have been created during the discussions of the ruling and opposition parties, and I am worried if they have gone too far.”

As of now, the National Assembly’s National Policy Committee is deliberating a plan to revise the Fair Trade Act.

The revision is intended to strengthen punishments on conglomerates for giving favorable treatments to their affiliates when commissioning projects.