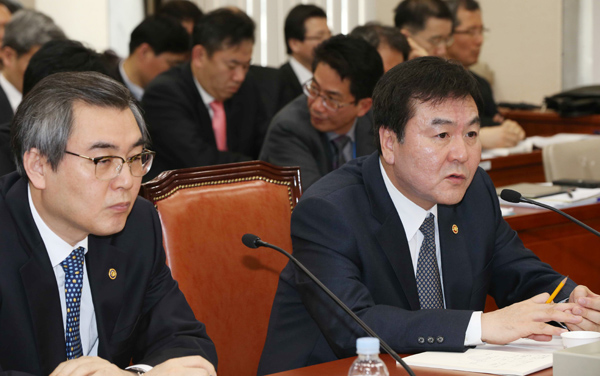 Financial Services Commission Chairman Shin Je-yoon, right, responds to a question from a member of the policy committee yesterday at the National Assembly in Yeouido, western Seoul. By Oh Jong-taek

The Financial Services Commission and Financial Supervisory Service have rolled up their sleeves to root out unfair practices in the financial industry by toughening regulations and enhancing oversight, FSC Chairman Shin Je-yoon and FSS Governor Choi Soo-hyun told lawmakers yesterday.

According to the FSC’s report, there have been a growing number of unfair trading practices in the capital market, including stock manipulation, in recent years.

In 2012, there were 271 cases of unfair trading reported, up 49 from the previous year. As part of efforts to prevent such cases, the FSC said it will establish a cyber system within the Korea Exchange to detect online stock manipulation attempts.

The regulator also said it will counteract financial institutions engaged in unfair practices by favoring their subsidiaries.

There has been criticism of the financial industry because subsidiaries within the same financial group have been favoring each other by selling mutual products such as insurance and funds at their own branches.

Such practices have been seen as going against President Park Geun-hye’s “economic democratization” policy direction that favors spreading benefits fairly throughout the industry.

“The task force team that will be launched soon will come up with measures to help improve the corporate governance structure and also relations between the financial holding company and its subsidiaries,” Shin said. “The team will come up with a revised law by June.”

Along with Shin, Choi also told lawmakers that one of its policy priorities is to “enhance monitoring on management conditions of financial institutions’ affiliate firms.”

“We also plan to induce voluntary merger and acquisitions on those financial firms that have the potential to go insolvent,” Choi said.

Meanwhile, both Shin and Choi noted in their reports to lawmakers that there remain external and internal risks in the Korean economy.

“The global economic recovery is expected to be limited this year,” Shin said. “There is a possibility that volatility in the global capital market and currency conflict will expand with quantitative easing in developed countries.”

Shin added that the domestic economy will also remain in a difficult position, affected by sluggish exports and growth due to external risks.

According to the International Monetary Fund, the outlook for the world’s economic growth rate this year is 3.5 percent.

There are also internal risks holding back the economy.

“It will be difficult for the Korean economy to improve in a short period of time taking into consideration the slump in consumption and investment,” Shin said.