Drivers just not getting their fill

Drivers just not getting their fill

It turns out many drivers get slightly less gas than what they actually pay for, as many station operators take advantage of legal loopholes by manipulating the flow of fuel pumps, according to a joint operation by the JoongAng Ilbo and K-Petro, the country’s petroleum quality and distribution authority.

On April 11, an inspector at K-Petro conducted a gas quantity examination at a station run by SK Networks in Nonhyeon-dong, southern Seoul.

The inspector poured 20 liters (5.28 gallons) of gasoline from the station into a government-certified measuring tank, which showed 100 milliliters (3.38 ounces) less than there should have been. Customers get only 19.9 liters of gasoline, but pay for 20.

“I think the error range was this big due to frequent changes of temperature in day and night,” said a gas station employee surnamed Kim.

When the JoongAng Ilbo and K-Petro conducted a joint inspection of 10 stations in Gangnam on April 10 and April 11, nine fell short of the advertised quantity of gasoline.

The number of reported cases of stations shorting their customers is rising. According to K-Petro, 74 were reported last year, up from 22 in 2011 and 13 in 2010.

K-Petro, a fuel distribution industry watchdog, suspects some station operators are manipulating the quantity of gasoline because the government beefed up the punishment for selling fake gasoline, which uses additives like Cenox that aren’t taxed and cost less than regular gas.

Cenox was introduced in Korea in June 2002 and quickly spread through word of mouth for its excellent value and performance as a petrol replacement, according to the Cenox Web site. 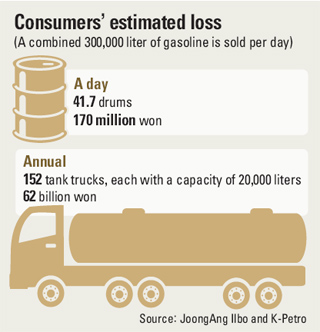 Such additives have been illegal since 2006, but gain popularity when the price of oil skyrockets because they increase profit margins at stations that sell regular gas.

“Manipulating gasoline quantity has become more advanced since last year,” said an inspector at K-Petro. “When we conduct gasoline measurement tests, stations pass the standard quantity test of 20 liters. But when the measurement test goes further and exceeds 20 liters, we see fuel dispensers slow the speed of running fluid to release less gasoline.”

The joint inspection of 10 gasoline stations in Gangnam showed they fill an average of 56 milliliters less gasoline per car than what the pump reads.

But that is not illegal because the permissible margin of error is plus or minus 150 milliliters for 20 liters of gasoline, according to the Ministry of Trade, Industry and Energy.

“I came all way here from Bundang to get gasoline in Gangnam because they charge more than gas stations in other areas, so I believed I’m paying for the right amount,” Kim said. “I feel like I got hit right between the eyes.”

K-Petro officials said 95 percent of gas stations across the country give less gasoline that pumps indicate, but within the legal margin of error.

The 10 gas stations inspected in Gangnam shorted each customer an average of 56 milliliters, less than a 65-milliliter drinkable yogurt.

But the loss to consumers every year reaches 62 billion won, based on 300,000 liters of gasoline sold every day, according to industry insiders.

“Gasoline stored in underground tanks has limits for volume distension,” said an entrepreneur who produces electric flow meters. “The government can restore trust over gasoline quantity by reducing the permissible margin of error. But it seems the government is hesitating to do that for fear it will get complaints from the industry.”

The permissible error margin for 20 liters of gasoline in the United States and Australia is plus or minus 100 milliliters.