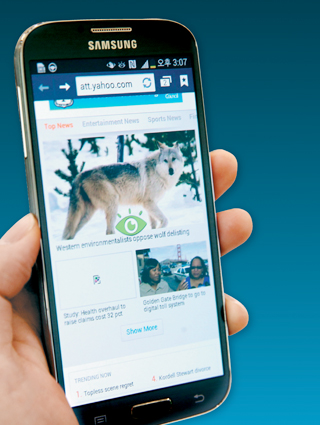 Samsung Electronics’ Galaxy S4 smartphone, the main challenger to Apple’s iPhone, will go on sale next week at U.S. carriers, including T-Mobile USA and Sprint Nextel.

Seven U.S. carriers and seven retailers will sell the Galaxy S4, Samsung said in a statement. T-Mobile has set an April 24 release date, aiming to be first to offer the device.

Sprint will follow on April 27, while AT&T plans to make it available on April 30. Verizon Wireless, the largest U.S. carrier, hasn’t set a date yet.

The Galaxy S4, unveiled last month at a lavish event in New York, represents the biggest threat to the iPhone’s lead in the U.S. market. The phone sports a larger screen, faster processor and higher-resolution camera. The next version of the iPhone is due out later this year.

“Samsung’s marketing has been quite effective at giving people permission to buy something other than the iPhone,” said Avi Greengart, a Teaneck, New Jersey-based analyst at Current Analysis. “But it’s a large market. There’s room for both Samsung and Apple. I don’t see one knocking off the other.”

The Samsung phone also provides an opportunity for carriers and stores to jockey for customers. Wal-Mart Stores, the world’s largest retailer, plans to offer the device for $168 with a two-year contract from AT&T.

Sprint will sell the Galaxy S4 to new customers for $149.99 with a contract, though existing subscribers will pay $249.99.

T-Mobile, the fourth-largest U.S. carrier, is using the Galaxy S4 debut to spotlight its new installment-plan approach to selling smartphones. It will offer the phone for a down payment of $149.99, followed by monthly payments. Its offer - part of its new Simple Choice strategy - doesn’t require a long-term contract.

With the S4, Samsung is capitalizing on inroads it made with the previous version of the Galaxy, Greengart said. The new model is expected to have about 20 percent longer battery life, he said. It also can use its front- and rear-facing cameras to take picture-in-picture photos.

“Consumers loved the Galaxy S3, so the new version should build on the popularity of that device,” Greengart said.