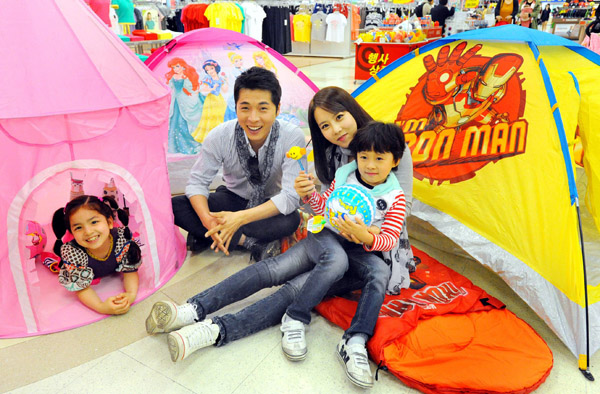 Models pose with camping supplies such as Walt Disney tents and sleeping bags for children at Homeplus in Yeongdeungpo, northern Seoul. Homeplus started promotions for camping supplies on Thursday with popular Disney characters at its 134 stores nationwide as the number of families enjoying outdoor activities and camping has increased significantly. Provided by the company

Despite the unseasonable cold weather, camping seems more popular than ever this season.

A variety of popular shows including “Dad, Where Are You Going?” and “1 Night 2 Days” have promoted the pastime to the nation, and outdoor brands have reported increased sales of related items.

Due to the chilly weather that continued through April, sales of clothes for spring declined 20 percent between April 1 and 16 compared to last year, while sales of camping supplies surged 40 percent during the same period year-on-year, Lotte Mart said. 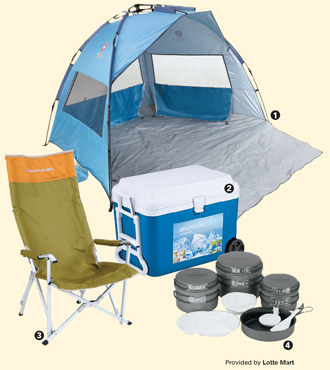 In particular, sales of tents, the most essential item for camping, surged more than 10 fold compared to last year at Lotte Mart.

Usually, large discount stores roll out sales for camping supplies in the early summer, but Lotte Mart introduced products a month and a half earlier this year.

In line with the increasing demand for camping and outdoor activities, Lotte Mart sold 1,000 One-Touch Shade Tents in just a week since the product’s release at the beginning of the month.

“In the past, demand for camping supplies was concentrated in the summer holiday season, but in recent years, the camping craze pushed the camping season forward,” said Park Young-joon, manager of the men’s sports team at Lotte Mart.

To meet the early demand, processed food company Daesang Chungjungwon also launched a portable bean paste product in a small package for camping and other outings.

The bean paste, usually served with barbecued dishes, makes it easy for those who go camping.

“As the number of camping lovers increases, consumer desire for the products is also growing. We expect small-sized packaged food products to get a good reception not only from consumers who enjoy camping, but also small families or singles,” said Cho Je-hyung, who is responsible for marketing bean paste at Chungjungwon.

Camping has also affected the fashion industry. More and more stylish camping apparel is attracting the attention of consumers.

Outdoor brands such as Black Yak, Offroad and Nepa have all introduced sportswear that can be worn casually during everyday occasions or during outings.

And as regular temperatures and spring weather are expected to return next week, the popularity of camping supplies is likely to surge even more.