Parker battles her twins for jewels

Parker battles her twins for jewels 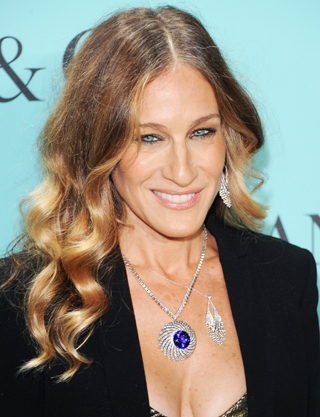 NEW YORK - Sarah Jessica Parker loves her jewelry - but so do a pair of 3-year-old thieves.

Parker’s twin daughters Tabitha and Marion get to try on mom’s baubles, and she said “they have walked away with many pieces.”

“Nothing of enormous value and I’ve told them basically all of it’s theirs with some set aside for my son,” Parker said Thursday at Tiffany and Co.’s Blue Book Ball.

Hudson said she has a more whimsical approach to her jewelry box.

“I have a theory about jewelry. If you lose it, it’s supposed to be gone. I don’t shed a tear if I lose something,” she said. But if not, she says, “I hold on tight to it.”

But when it comes to jewels and baubles, does size matter?

Parker had a more meaningful response, as her modest-sized wedding ring from husband Matthew Broderick is from Tiffany’s.

“Not to me, no. I have a beautiful ring that I love very, very much and it’s from Tiffany’s and it’s my most, most favorite ring at all and it’s not as you can see super robust or muscular but I think it’s every bit as lovely as any big-dot rock,” she said.

“But it’s great fun, don’t get me wrong, to borrow the big stuff occasionally. I mean, it’s a real privilege.”