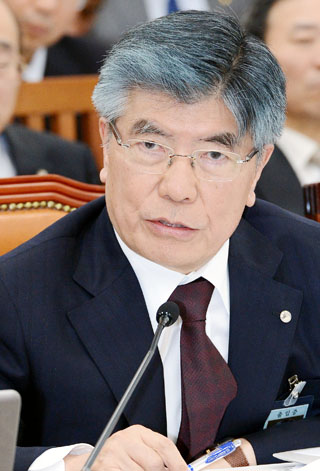 Bank of Korea Governor Kim Choong-soo stressed that he will fulfill his four-year term as a way of keeping the independence of the central bank.

“The independence of the central bank is an important value in any country,” Kim said while briefing lawmakers at the National Assembly on Monday in Yeouido, Seoul. “I will stay as [BOK] governor until March of next year.”

Kim stressed that the central bank was making its decisions without being influenced by the government.

The governor made a similar comment last week when he was in Washington to attend a G-20 meeting of finance ministers and central bank governors.

Kim said the reason there is set tenure for the BOK governor position is not only to guarantee the independence of the central bank from government influence but also to withstand market pressure.

Kim’s comments came as his independence has once again been placed under the spotlight. The monetary policy decision made on April 11 - freezing the benchmark seven-day repo rate at 2.75 percent for the sixth consecutive month - was a surprise to the market as well as the government and was considered the first defiance the central bank governor has shown since he was appointed to his position three years ago.

This was a stark contrast to a track record that seemed to follow the wishes of the government, especially under the previous Lee Myung-bak administration.

If Kim was criticized for lack of independence in the past, his sudden show of independence from the Park Guen-hye administration has raised concerns, especially when the economy seemed to need some stimulus, and since an uptick in Japan is starting to affect Korea’s exports.

Some are even questioning Kim’s reading of the Korean economy.

Kim earned the nickname “Bultong” Joong-soo not long after he became BOK governor. Bultong means failure to communicate. He is also called “Donggyeul” (Freeze) Joong-soo for holding interest rates at the same level for extensive periods.

The market knows Kim mostly for his miscommunications.

“The market has been in a state of confusion since Kim became the governor,” said a trader at a local brokerage firm who requested anonymity. “He said he always turned right after signaling right but in most case he turned left after saying he would turn right.”

The miscommunications started not long after he became governor in 2010. That year, despite market expectations based on his comments about inflation worries, the central bank governor kept the borrowing rate low.

At the time, the Lee administration was pushing growth. In 2010, the economy grew 6.3 percent, a significant increase from the 0.3 percent of the previous year. Consumer prices grew 3 percent that year.

But in the following year, although the economy’s growth slowed to 3.7 percent, consumer prices grew 4 percent. As a result Kim was considered to have failed in controlling inflation.

At the time, analysts proposed raising the interest rate for two reasons. One was to stabilize consumer prices while the other was to raise the rate as a precautionary measure in case the economy faced an unexpected crisis. With a tighter monetary policy, the country would have an additional choice other than tapping into the government coffers to stimulate the economy.

This month, the governor made a move that was translated as defying the Park administration’s desire for economic stimulus.

The bond market was betting that the central bank would at least lower the key borrowing rate to further support economic stimulus. Fearing that economic growth would fall to 2.3 percent, the Park government is seeking a 17 trillion won supplementary budget that is awaiting approval by lawmakers. The government has been signaling the central bank to join the campaign by lowering the interest rate. But it didn’t.

Although his independence is welcomed in theory, some argue that it raises concerns about a shaky relationship between the two major economic policy departments.

At the National Assembly, the central bank governor denied he has ever sent out misleading signals.

“The market mistrusted me,” Kim argued.

He also defended his past judgments saying that he did not act late, as the market claims, to raise interest rates amid the sharp rise in inflation.

“Carrying out an exit strategy by raising the benchmark rate relatively faster than other countries at the time was an unconventional action,” Kim said. “The central bank has raised the benchmark rate on five accounts since 2010,” the governor added. “The only country that has made a similar move is China.”

Kim added that before he joined the BOK the central bank rarely made changes in the interest rate.

“It’s easy to lower the interest rate when exports are expected to face difficulty since Korea’s external dependency is high but it’s very difficult to raise the rates,” Kim said.