No old wives’ tale: More grooms are younger than their brides

No old wives’ tale: More grooms are younger than their brides 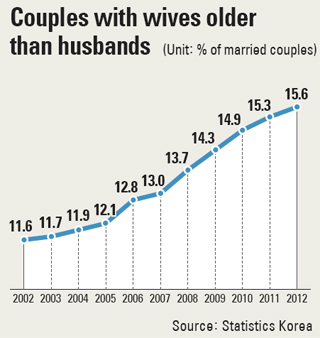 When a 33-year-old surnamed Kim decided to marry last year, she had one concern involving age. She had thought that in conservative Korean society, age difference between husbands and wives matters a lot and that her parents and future in-laws would raise concerns. Kim is two years older than her husband.

“I was worried at first,” she said. “But when I went to his parents’ house, they mentioned nothing about my age. My parents also didn’t object.”

Kim said that later on, she was told by her husband that his parents had said that they were “okay” with the age difference. Now that it’s been almost a year since their wedding, Kim said that because she is older than her husband, she feels she is respected more.

“I have my voice, experience and individuality,” Kim said. “And my husband respects that.”

Like Kim and her husband, marriages with older women and younger men are on the rise, signaling that the age factor in a relationship, which once was considered important, matters less these days.

Meanwhile, last year 68.2 percent of married couples had older husbands, down from 68.4 percent the previous year. In 2002, 74.1 percent of marriages involved older men and younger women.

According to Statistics Korea, 40.3 percent of women who walked down the aisle last year were in their late 20s but the percentage of women getting married in their 30s increased by 9.1 percent last year.

The trend is vividly prevalent in the entertainment scene.

Most recently, trot singer Jang Yoon-jung, 34, said in a Monday press conference that she will tie the knot with KBS announcer Do Kyung-wan, 32, in September. The Jang-Do couple isn’t alone.

Meanwhile, a Statistics Korea report yesterday also showed the number of marriages last year totaled 327,100, a 0.6 percent drop from the previous year. Fewer Koreans also tied knots with foreigners. Last year, there were 28,300 such marriages in Korea, 1,400 less than the previous year.