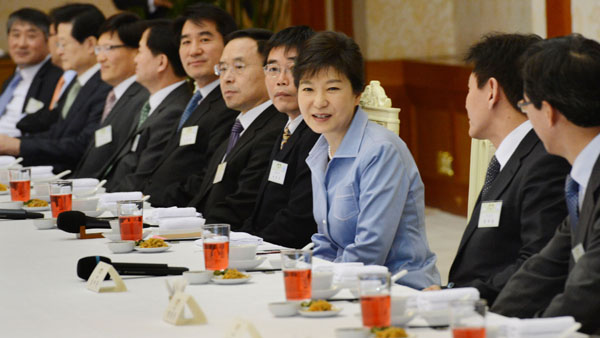 President Park Geun-hye hosted a luncheon at the Blue House of 46 chief editors of local newspapers and broadcasters, as a gesture to facilitate communication with the media and public.

“I would appreciate it if you could give me help and courage to build up trust and communicate with the people,” Park said at the luncheon.

“From now on, I ask you for criticism and advice so that the new administration can do its job correctly.”

She put an emphasis on the role of the media as a bridge to connect the government and the public.

“The media plays a communication role to link people, the administration and the legislature,” she said.

“It has also a great influence on forming a public consensus in regards to government policies and directions. For this reason, it has significant roles and responsibilities.”

She also answered questions on pending issues, such as North Korea and Japan policy, as well as economic democratization.

Attendees said Park appeared to pay full attention to what editors said during the luncheon and there was a good atmosphere during the dialogue.

As part of her efforts to overcome criticism of her “high-handed” attitude in dealing with politicians, the media and the public, Park has also recently convened a series of meetings with not only ruling Saenuri Party lawmakers, to which she belongs, but also the largest opposition Democratic United Party members.

On April 9, Park convened a luncheon with senior Saenuri members and lawmakers at the Blue House and discussed some important bills regarding the real estate market among others.

It was her first luncheon with senior ruling party members since her inauguration in February.

Observers also said at the time that the mood was good during the talk, and Park reportedly said she would “listen carefully to what the [ruling] party says” in making a decision on state affairs, apparently including appointments of high-ranking government officials.

A day later, on April 10, she also had lunch with National Assembly Speaker Kang Chang-hee, vice speaker Park Byeong-seug and other senior members.

There, she also asked for their cooperation in passing an array of important bills, including a supplementary budget.

Two days later, April 12, Park again hosted a luncheon with the leadership of the DUP, at the Blue House, for the first time since she took office.

There, she asked for “establishing a partnership” with the opposition and made notes when opposition leaders asked her something regarding sensitive social issues.

Between April 9 and last Friday, Park had a total of 11 luncheons with incumbent lawmakers, meeting with 166 of the entire 300-member legislature, including 30 DUP members.

Both ruling and opposition members told the JoongAng Sunday that the luncheons were “part of efforts for communication.”

However, the relationship with the DUP is still chilly, in part due to the controversial appointment of Oceans and Fisheries Minister Yoon Jin-sook.