Stellar Q1 success, with an asterisk

Stellar Q1 success, with an asterisk 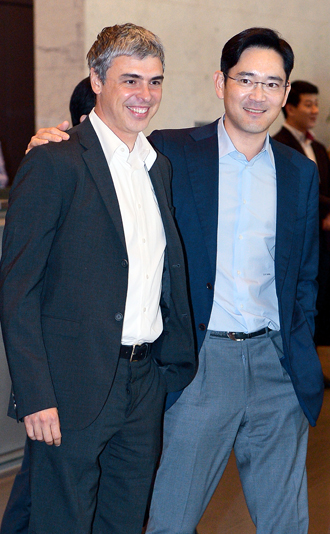 Samsung Electronics said yesterday in a regulatory filing that its first-quarter operating profit surged 54.3 percent year-on-year to 8.78 trillion won ($7.9 billion) mainly on the strength of sales of its highly lucrative smartphones. But its winning streak failed to continue for a fifth straight quarter as profit edged down 0.7 percent compared to the previous three months. Sales revenue in the January-March period was up 16.8 percent from a year earlier to 52.87 trillion won.

Among all product divisions, IT & Mobile Communications accounted for 74.1 percent of the world’s No. 1 smartphone maker’s operating profit and 62.1 percent of sales revenue.

Samsung captured a third of the global smartphone market in the same quarter that growth for Apple’s iPhone fell to its slowest pace ever, according to market researcher Strategy Analytics on Thursday. Shipments of Samsung smartphones jumped 56 percent to 69.4 million units in the quarter ended March 31. Apple’s iPhone shipments advanced 6.6 percent to 37.4 million units, while LG Electronics gained third place for the first time.

However, first-quarter operating profit at Samsung’s Consumer Electronics division - which includes TVs as a key product - was less than half what it was in the same period last year. “Weak seasonality and a sluggish economy took their toll on Samsung’s sales of TVs and home appliances,” the company said.

Despite the success of the Galaxy line, Samsung’s outlook for the second quarter was somewhat subdued. “Global demand for smartphones is forecast to dampen in the second quarter, compounded by heightened competition,” the company said.

Although some analysts and experts expected Samsung to come out with investment plans for the rest of the year, the company is still “reviewing.” “Overall, the size will be similar to that of last year, but we intend to assign more to the second half,” said Senior Vice President Robert Yi.

Meanwhile, Google CEO Larry Page, who was visiting Seoul, met with Samsung Electronics Vice Chairman Jay Y. Lee and other Samsung executives - including J.K. Shin, president of the IT & Mobile Communications division - at the company’s Seocho office in southern Seoul over lunch to discuss cooperative measures. He later headed to the Blue House to meet with President Park Geun-hye.

“We talked about future cooperation,” Lee told reporters after Page left, adding the Google CEO “showed huge interest in Samsung’s OLED [organic light emitting diode].” Shin added that the discussion was about “new cooperation,” without elaborating. But that signals the two firms that have maintained a symbiotic relationship through Google’s Android operating system and Google TV may boost their ties. It also contradicts rumors Samsung is trying to reduce its reliance on Google.

After arriving at Gimpo International Airport in the morning, Page went straight to the Samsung Display factory in Asan, South Chungcheong, on a helicopter Samsung provided. There, the company is manufacturing and developing small OLED panels and flexible OLED, the next-generation display. As potential demand from Google for Samsung panels, experts point to Google Glass, a smart watch and driverless automobiles.