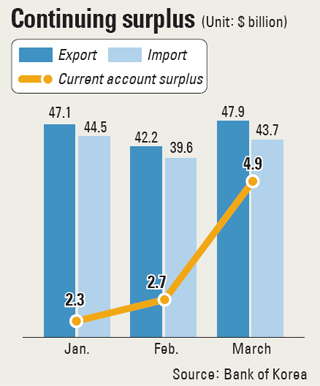 The current account balance posted a surplus in March for the 14th consecutive month. It comes after the cumulative surplus in the first quarter exceeded $10 billion for the first time.

However, concerns still remain, especially since the surplus in recent months was largely due to a sharp drop in imports rather than an increase in exports.

And the impact of the weakening yen is expected to have a greater effect on exports in the second and third quarters.

According to the Bank of Korea yesterday, the current account balance last month was $4.9 billion. Not only is this a sharp increase from the $2.7 billion surplus in February, it is the largest surplus posted since $6.9 billion in November last year.

Outbound shipments in March improved compared to the previous month, growing 1.3 percent year-on-year to $47.9 billion. This is a turnaround from February’s 7.9 percent drop. But inbound shipments saw a faster drop, falling 1.5 percent to $43.7 billion.

As a result, the trade surplus in March was $4.2 billion compared to last year’s $2.9 billion. This is a nearly 40 percent increase from $2.56 billion in February.

Exports of telecommunications equipment and semiconductors improved. While exports to the United States and Japan fell, the exports to China, Southeast Asia and South America were up.

Exports for the first three months grew 2 percent year-on-year to $137.4 billion, while imports fell 3.1 percent to $127.9 billion. The trade surplus in the first quarter this year grew from last year’s $2.6 billion to $9.3 billion.

But the biggest problem is expected to come in the near future. “The impact of the weak yen [on the Korean economy] is likely to appear much sharper in the second and third quarters,” said Kim Young-bae, head of the economic statistics department at the central bank.

Even the Bank of Korea Gov. Kim Choong-soo last week expressed concern about the depreciating yen, adding that this is just the beginning and it is urgent that the Korean government come up with measures to counter the impact of the weakening yen.

The yen yesterday appreciated slightly, trading at 97 against the dollar. Nevertheless, it remains close to 100, which many market experts say will be reached in the near future.

The depreciation of the Japanese currency has been a major threat especially to the Korean economy as it undermines price competitiveness of the Korean goods in the global market, especially where the two countries overlap, such as automobiles.

In fact, the nation’s leading automaker, Hyundai Motor, which thrived on the weakened Korean currency since 2008, saw its operating profit in the first quarter shrink 10 percent year-on-year even as revenue grew 6 percent.

Other carmakers, including world leader Toyota, are expected to enjoy similar growth.