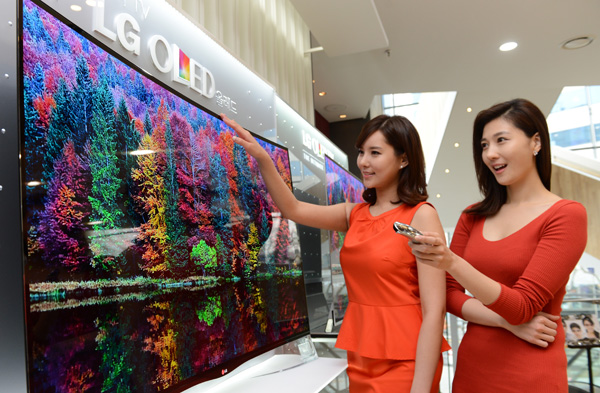 LG Electronics yesterday placed on Korean market shelves its cutting-edge 55-inch curved OLED (organic light-emitting diode) TV, the first of its kind in the world - four months after it launched sales of its 55-inch OLED TV, also a first, in January.

“The curved OLED TV is the most advanced next-generation display with the best screen quality and design,” said LG in a release.

Just like an IMAX movie screen, the curved TV - which costs a whopping 15 million won ($13,547) - makes it possible for a viewer’s eyes to maintain the same distance from the screen regardless of his or her position. That minimizes distortion and peripheral dimming, leading to a more comfortable and realistic viewing experience, according to LG.

The company has come up with the optimal curve angle after five years of research. The super-strong and light CFRP (carbon fiber reinforced polymer) is extraordinarily thin (4.3 millimeters or 0.16 inches) and light (17 kilograms or 37.5 pounds).

The nation’s No. 2 TV producer surprised industry observers by debuting the curved TV at the Consumer Electronics Show in Las Vegas in January. Samsung Electronics also showcased a 55-inch OLED TV and a curved counterpart, saying it would release the two TVs in the first half of the year. However, Samsung has yet to confirm the exact schedule.

Samsung appears to take a rather laid-back stance when it comes to OLED TVs, given that the market for the pricy products is in its early stages. In March, Samsung told buyers at a forum in Jakarta that it would start selling OLED TVs in August for about 20 million won.

Some experts cite the technological barrier Samsung has faced concerning mass production of large panels as the key reason for the delay, although it is already dominant in smaller OLED panels. Samsung and LG use different configurations for OLED screens.

“It is undisputable that OLED is a next-generation display, but you need to look at the market from consumers’ perspective, not producers,” said Jeon Byung-gi, an analyst with E*Trade Securities in Seoul. “OLED TV prices are not at a level that consumers can accept, mainly because consumers can’t see a huge difference between OLED and LCD [liquid crystal display].”

Still, LG seems confident with its technological edge. “With the world’s first launch of the curved OLED TV, LG has further solidified its stance as a leader in the next-generation high-resolution display market,” said Choi Sang-gyun, executive vice president of domestic marketing at LG Electronics. “With the best screen quality that competitors won’t be able to match, we won’t let go of leadership.”

LG also plans to unleash a smartphone with plastic OLED in the fourth quarter. “We are preparing plastic OLED smartphones with LG Display step by step,” said Yoon Boo-hyun, vice president at the Mobile Communications division of LG, without elaborating, in a conference call with analysts last Wednesday.