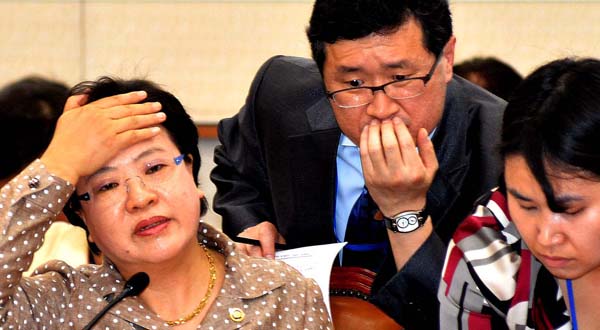 Jung Hyun-ok, left, vice minister of employment and labor, looks exhausted Tuesday afternoon at the National Assembly, where the revised bill on extending the retirement age to 60 was passed. [NEWSIS]

Bills on extending the retirement age to 60 and disclosing the annual salary of executives at large enterprises through regulatory filings aimed at boosting corporate transparency were approved Tuesday by the National Assembly.

“If the salaries of executives of conglomerates are posted on the front page of newspapers, it is obvious it will cause side effects, such as promoting a sense of social incongruity and disharmony,” said a managing director surnamed Kim, who works at a large corporation.

“We are worried people might think of remuneration for executives as a kind of extortion worth hundreds of times more than that for employees, rather than considering it as compensation for their management efforts to survive neck-and-neck global competition.”

There also are concerns about other adverse effects. According to the bill, executives who are registered with their boards of directors and have voting rights would have to report their compensation. Currently, that group would include chairmen Chung Mong-koo of Hyundai Motor Group, Chey Tae-won of SK, Koo Bon-moo of LG Group and Heo Chang-soo of GS Group.

However, if they forgo their registered status, there is no requirement that they disclose their remuneration. Recently, Vice Chairman Chung Yong-jin of Shinsegae Group ended his registration.

Such cases, many in business say, undermine the purpose of the bill to strengthen the control of shareholders and increase management transparency.

The bill to extend the scope of punitive damages by large corporations to their small and medium subcontractors could hurt those SMEs, business lobby groups say.

“Large companies could feel the burden and change their subcontractors from local SMEs to more competitive foreign companies,” said Lee Sang-ho, policy director of the Federation of Korean Industries.

“It is similar to Japanese retailers encroaching on the commercial areas of Busan and South Gyeongsang province after the government regulated local large retailers to prevent them from entering the areas to protect small businesses,” Lee said.

The business community also expressed misgivings about the bill to extend the retirement age to 60.

“The bill could cause a conflict between labor and management as it is not based on the premises of the wage adjustment or introducing a peak wage system,” said Park Jong-gap of the Korea Chamber of Commerce and Industry. “In order to minimize the adverse effects, there must be adjustments to match the wage levels and productivity.”

The bill to impose penalties of as much as 10 percent of total sales on businesses that cause serious damage through chemical spills is also a matter of concern for the business community.

Some believe the regulation will encourage companies to conceal accidents.

“The penalty is excessive enough to make SMEs go bankrupt,” said a CEO of an SME in Gyeonggi.

Another official doubts legislators thoroughly reviewed all these bills.

“Given that the bills were passed in line with the revised supplementary budget currently being screened, it seems the government eventually judged the economic policies based on politics,” he said.

Others say that the legislation is a sign of the times and Korean businesses will have to adapt.

“Now, there is a social consensus that economic democratization can no longer be put off. Rather than rejecting and opposing new regulations, the business community will have to change direction and improve existing practices,” said Kim Sang-jo, professor at Hansung University and the President of the Solidarity for Economic Reform.