Onstage in Seoul, ‘Zorba’ not so Greek

Onstage in Seoul, ‘Zorba’ not so Greek 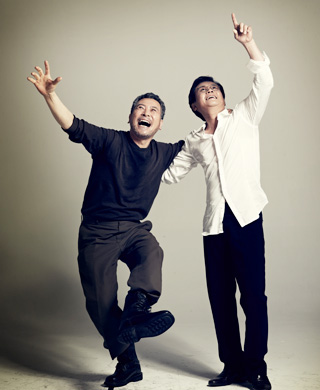 Choi Maxim, left, played by Nam Kyung-eup, is to Kim I-mun, right, played by Han Yun-chun, what Zorba is to Basil in the Nikos Kazantzakis novel, “Zorba The Greek.” Provided by the Myeongdong Theater

The Nikos Kazantzakis novel, “Zorba the Greek,” will ?come to the stage in Seoul this month.

“Laozianghu Choi Maxim,” a play adaptation of the novel by Yang Jung-woong, will be staged from ?Wednesday to June 2 at the Myeongdong Theater in Myeong-dong, central Seoul?.

It’s the theater’s first ?translation of a classical novel into a theater play. More works will follow, the theater said.

“Zorba The Greek” is among Koreans’ favorite classical novels?. Last year, more than 80,000 copies of the book were sold in Korea, spurring an increased interest in reading the classics.

“The original is such a great text, so I think there might be an area in my work that lags behind the original,” said Bae Sam-sik, the playwright of “Laozianghu Choi Maxim.”

“The most difficult thing in this project was to bring a novelistic narrative onto the stage with the gist remaining intact.”

The novel’s setting, the Greek island of Crete in the early 20th century, is turned into a Korean village in a Russian border area when the Korean Peninsula was under Japanese colonial rule from 1910 to 1945.

Choi Maxim is a Korean version of Alexis Zorba, whose unhinged, playful - and sometimes enigmatic - character disarms the inhibition of a young intellectual, Basil. Kim I-mun, who escaped the lack of intellectual freedom on the Korean Peninsula, plays an incarnation of Basil.

Bae said he came upon a newspaper article about the Korean people who lived in the Russian territory of Primorsky Krai that borders North Korea and China, which is also called the Maritime Province.

“Crete in the novel belongs to Greece, but it is a whole different space with a whole different history and culture,” Bae said. “It suffered a horrendous conflict between Turkey and Greece. I wondered which place in our history would be like that and turned my eyes to Yeonhaeju [the Korean name of the Maritime Province], where many Koreans fled the Japanese colonial rule to survive.”

Veteran musical actor Nam Kyung-eup plays the protagonist, Choi Maxim. To digest the role, he had to learn many new dancing moves and how to play the accordion. Nam said that he has been practicing 15 hours a day. “As I entered training, I found out that it is no less demanding than Shakespeare plays,” he said.

Oh Mi-yeon, who plays Zorba’s lover, Madame Hortense, in a role with the same name as the original character, is returning to the Myeongdong Theater for the first time in 38 years. She began her career as a theater actor in 1972, one year before she debuted in television, and played a role in the stage adaptation of the famous Korean movie, “Flame in the Valley,” directed by Kim Soo-yong, at the Myeongdong Theater in May 1975.

“When I received a call [from director Yang], it occurred to me that I performed at the Myeongdong Theater back then, so I was excited to have one last chance in my life to stand on the stage of this theater,” Oh said.

Oh said that she is practicing, watching the 1964 movie, “Zorba the Greek,” which starred Russian-born French actress Lila Kedrova as Hortense. “I am trying to make a more beautiful and lovely Hortense than the woman in the movie,” Oh said.

Japanese independent musician Kasuga Hirofumi, who has pursued a musical career in Korea under the name of Hajji, is a musical director of the Korean play.

He composed several songs and also used some popular Korean songs from that time, including “Sighing Cosmos” which was sung in 1939 by Choi Hyang-lim.

“To those audiences that are living this difficult reality without hope, I want to deliver a message that life has its share of ordeals, but is still something worthy to live,” director Yang said.