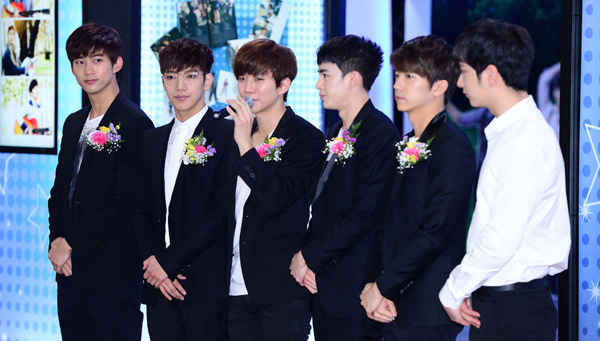 Boy band 2PM opened a section named after the group in the store “G+ Star Zone” inside the Apgujeong Rodeo Station on the Bundang subway line, yesterday.

The store, named “2PM - G+ Star Zone,” is part of a projected organized by the Gangnam District Office called “G+ Dream Project” to help teenagers and children in need. The office invites local and international K-pop fans to enjoy Hallyu contents at the store and encourages them to donate to such people in need.

“We have chosen 2PM as the starter because it has become the central icon for the Hallyu, as it recently completed tours in Japan and elsewhere in Asia,” said an official at Gangnam District Office, southern Seoul, according to local media reports. The group’s section ?will last until July 31.

Meanwhile, the group released photos that describe the theme of the title song, “Listen to This Song and Come Back,” on their album scheduled to be released on Monday. The six members are in suits and are seen staring off as if they feel alone while on the rooftop of a building.