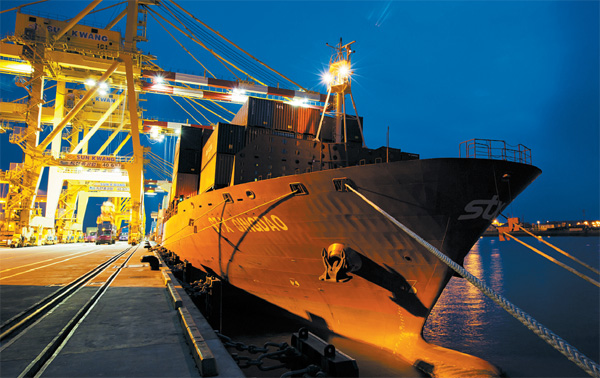 The STX Qingdao container ship is docked at the Sun Kwang Incheon Container Terminal in Incheon the night of April 19. [BLOOMBERG]

Korea Development Bank, main creditor of the debt-ridden STX Group, has a principle that each affiliate of the conglomerate will be structurally adjusted separately, according to a high-level KDB official.

“The restructuring of STX will not be carried out in the form of the group as a whole, but each affiliate separately case by case,” the official told the JoongAng Ilbo yesterday.

The remarks signal that creditors that also include the Export-Import Bank of Korea, NH Nonghyup Bank, Woori Bank and Shinhan Bank, will provide liquidity to help save core affiliates of the group that are able get back on their feet.

STX Group has suffered from a severe credit crunch, as its affiliate STX Pan Ocean was not able to attract a bid from any investor interested in purchasing a 35.9 percent stake in March. KDB is currently conducting due diligence of STX Pan Ocean as part of a takeover process. The group had been suffering financially since the 2008 global financial crisis.

“It is our [creditors] judgment that if the amount of an affiliate’s corporate bond or corporate bills is higher than what the creditors have lent them in the form of loans, the affiliate will have to go through restructuring through court receivership and not a voluntary corporate restructuring agreement or a workout program,” the official said.

A voluntary corporate restructuring agreement and workout program involves creditors being in charge together and managing the ailing firm with the aim of reviving the company, while a court receivership program involves the court deciding whether to save or let go of the company.

KDB plans to apply the principle of separate restructuring to 20 of the 23 STX Group affiliates, including STX Heavy Industries and STX Energy. Of the affiliates, STX Construction has applied for court receivership on April 26.

The focus is also on what path STX Group Chairman Kang Duk-soo will take. Industry sources note that he will most likely maintain management rights, but the number of shares he holds will shrink.

“Kang, who founded the group, should maintain the management rights because that will help the group reestablish its businesses, while at the same time minimize the shock the restructuring has on its subcontractors,” said a financial regulator. “But he will have to reduce sharply the shares he holds in the group to show he is responsible for turning the group insolvent.”