Diving deep to save a way of life

Diving deep to save a way of life 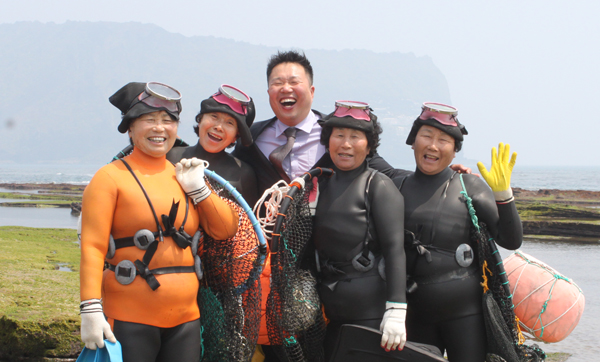 Lee Han-young, founder of Soombi, a society for the preservation of haenyeo - female divers on Jeju Island - used to work for a publishing company in Seoul. As a scuba diving enthusiast, he often imagined himself diving into the deep blue sea and gathering seafood.

To realize his dream, in April 2008, Lee flew to Jeju Island to attend the newly established Jeju Hansupul Haenyeo School, which fosters haenyeo who gather various shellfish, seaweed and other seafood without using any equipment.

During the 16-week course, he learned how to dive, swim and pick seafood, while traveling back and forth between Jeju and Seoul. Among the 34 students, he was one of three men and two who weren’t residents of the island.

“I had longed to be a haenam [male diver]. But most senior haenyeo wondered why a man from a city came all the way to learn the arduous work,” the 40-year old said.

But it wasn’t long before he mingled with them. And besides diving, he got to learn the culture of haenyeo, which is disappearing. Feeling some shame, he established the society in the same year.

“Many people assume haenyeo dive underwater in summer. But during the period, it is forbidden to pick up conch, the main source of their incomes, for its preservation. So they usually swim when it is freezing cold underneath the sea,” Lee said

“Haenyeo are known for reaching up to 20-meter depths [65.6 feet] and holding their breath up to two minutes. However, it is not their gifted ability, but their family that makes it possible. The cooperative community of haenyeo is the precious legacy we should pass on,” he added.

But the reality is quite different. As of 2012, half of the 4,574 haenyeo who are actively working are above 70, as young people shun the job.

Hoping to sustain the culture, Lee discussed with the local government and created a demonstration program of haenyeo swimming at Aqua Planet, an aquarium near Seopjikoji Beach, Seoguipo, Jeju last July. This was when he quit his job and settled on the island.

The demonstration presents two haenyeo swimming just the way they usually do underneath the sea for 10 minutes in a 10-meter-deep aquarium. Their performance is popular, especially among foreigners. The group consists of 16 seasoned haenyeo whose average age is 70.

“As the program is set all year around, some of them have to perform even on Korean holidays. I feel sorry for them. But they readily come without any frowns and even thank me for helping keep their pride as haenyeo,” Lee said.

Beginning in June, they will expand their activities by taking part in a synchronized show at Aqua Planet Jeju.

In addition, he will create direct market access by uploading information about where and when haenyeo work on the society’s Web site, (www.soombi.co.kr) in three months.

Lee said, “I think just giving out diving suits and free medical benefits alone can’t preserve the culture of haenyeo. Instead, we need to support them to be financially self-sufficient. It is an urgent matter, as only 70 percent of current haenyeo will remain in less than 5 years.