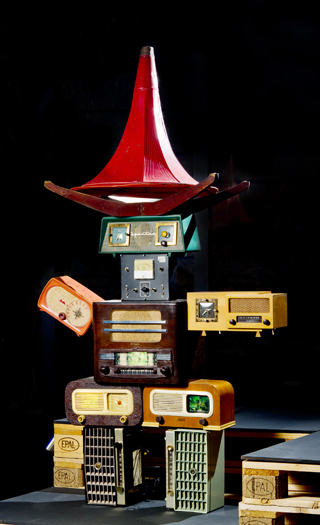 Works from three Korean artists, including the late media art pioneer Nam June Paik, will help transform the tranquil Scottish city of Edinburgh into a florescent cultural hub for the upcoming Edinburgh International Festival. The festival, which runs from August 9 to Sept. 1, focuses on how media art interacts with public space and performing arts, said Jonathan Mills, the festival director at a press conference held in Seoul last week.

“Has anyone who is such a creative artist predicted so expertly and clearly, twenty, thirty, fifty and sixty years ago, the way in which our culture was about to become fascinated by the video image, by the photographic image, by the recorded image, by the recorded sound as your great artist Nam June Paik?” said Mills, adding he decided to invite the Nam June Paik Art Center to the festival after visiting the “TV Garden” exhibition last year, which he thought would be the most appropriate exhibition to meet this year’s festival theme, “Art and Technology.”

Park Man-woo, director of Nam June Paik Art Center agreed by saying that the artist’s “media artwork is perfect for the festival, as it aims to show the new form of convergence between art and technology.”

Paik’s major works, including “TV Cello” (1971) and “Global Groove” (1974) will be on exhibit at the Talbot Rice Gallery during the festival.

“The Edinburgh International Festival was started in 1947, immediately after a horrendous war. I mentioned this particularly with some feeling in a country like Korea, for whom many people understand only too well and too immediately the effects of war and the devastation of the shifts of the politics that can happen in any population. But Edinburgh, like Korea is a success. It is a success against the odds,” said Mills. “At this year’s Edinburgh International Festival, over 3,000 artists will participate and 40 nationalities will be represented in a truly international forum, in which three fantastic Korean projects will take pride of a place and demonstrate how international your culture and your cultural context is in Korea.”

Media artist Kim Hyung-su, a media art professor at Yonsei University who explores new artistic expressions in public spaces by creating media facades using LEDs, also has been invited to the festival. Kim created some of Seoul’s major media art projects, including the facade work on the KT building in Gwanghwamun and Seoul Square in central Seoul. Kim will light up the public space in Usher Hall, which is the festival’s major venue, as well as Lothian Road and the Festival Theater.

“In a year when we are celebrating creativity and technology, it is appropriate that we invite Professor Kim to make a very special dimensioned program using archival and contemporary sources to literally provide another dimension, a skin, a media skin, through which we will appreciate and experience the festival not just inside our theaters but literally in the city itself,” said Mills. “I can’t wait for his contribution to the festival, a contribution that will juxtapose the whole history of the festival.”

The performance group Your Media Arts Project will present a fusion of dance and media art in collaboration with media artist Kim’s “Madame Freedom.”

Kim Hyo-jin, the head of YMAP, according to Mills, “not only makes work that looks beautiful on the human body but also shows a very sophisticated dimension of technology.”

“This project reminds us of new directions for dance itself, new futures for the work of choreographers. At the same time, it brings us back to a beautiful period of cinema, a black and white of cinema noir, to remind us not only of the present technology but its immediate past,” said Mills.