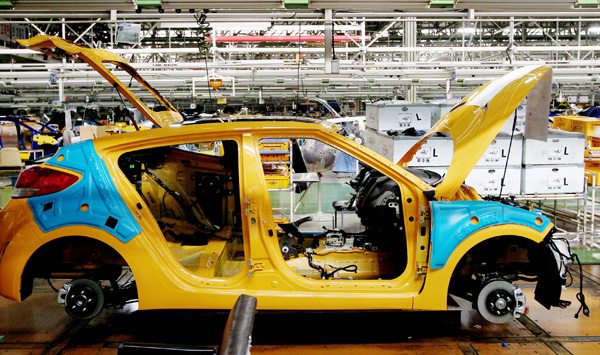 Production lines halted at a Hyundai Motor plant during a strike in 2012. The current stoppage involves overtime work on weekends.[BLOOMBERG]

Hyundai Motor’s plan to normalize domestic production from May has been scrapped as disagreement by its union regarding weekend overtime work continues.

The nation’s largest automaker was supposed to begin weekend production starting Saturday after the management and union reached agreement on April 26. But some groups within the union opposed the agreement and refused overtime work on the weekend.

As a result, Hyundai’s weekend overtime stoppage was extended to nine weeks straight. The company said 63,000 vehicles failed to be manufactured as a result, costing the company 1.3 trillion won ($1.18 billion).

“We already reached agreement with the representative of the union, but apparently some members are not satisfied with the result and are blaming union leaders,” an official from Hyundai said. “There’s nothing we can do at this point but to wait for the union to solve its own issues.”

After Hyundai decided to implement two daytime shifts from March - with the first group working eight hours and the second nine - management and labor were involved in a tug of war over payments.

Previously, employees worked 14 hours over two days and received about 310,000 won. Since the new system allows employees to work 17 hours in two days, the union asked for more money.

Hyundai brought back former Vice Chairman Yoon Yeo-chul to resolve the issue. Yoon, who resigned last year, was known for a strike-free period from 2009 to 2011 when he was in charge of labor issues.

Several days after Yoon returned to work, an agreement was reached. The company agreed to pay 450,000 won to workers who did overtime duty on weekends, which was just 17,000 won lower than what the union originally demanded. Hyundai originally offered 396,000 won for the weekend overtime labor.

Then some groups within the union blamed leader Moon Yong-moon for a bad deal and asked for re-negotiation.

Hyundai’s 45,000-member labor union reportedly has nine large groups, categorized by working sectors and plants. Leaders from these nine groups were reportedly angry that Moon signed a “poor deal” with the company.

Union members from Ulsan plant’s first factory line on Wednesday already protested. The line there stopped for three hours, causing the disruption of the manufacturing of 300 vehicles.

This was not the first time Hyundai experienced internal conflict within its union. In 2008, some members occupied a negotiation table during an annual wage negotiation and that led to the retirement of union leaders.

Some analysts say members are positioning themselves for a union leader election in September.

Hyundai’s union has been criticized lately for asking for a wage hike while its productivity declines.

But local plants have been going backwards, increasing from 30.5 hours in 2007 to 31.3 hours in 2011. The HPV in the Beijing plant, meanwhile, is 19.5 hours, although it has more new assembly facilities.

The company is worrying that labor woes could dent its results in the second quarter.

Hyundai last month revealed its operating profit for the first quarter dropped more than 10 percent from a year earlier. Hyundai said its export volumes decreased because of supply problems and the weakening yen.

Hyundai’s domestic production in March and April declined more than 15 percent compared to a year ago.

If the domestic weekend production stoppage continues for a long time, industry insiders expect that Hyundai will keep beefing up overseas production. The automaker announced two weeks ago it will expand its third plant in China’s annual production capacity to 450,000 vehicles by the end of this year, an increase of 150,000 units.

Rumors of Hyundai considering building another plant in a foreign country are rising.