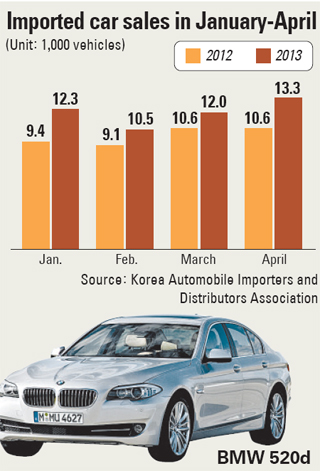 Sales of imported cars in April set a monthly record, according to data released by the Korea Automobile Importers and Distributors Association (Kaida) yesterday.

A total of 13,320 foreign cars were newly registered in April, 24.9 percent more than a year earlier.

The previous record was set in November, when 12,470 imported cars were sold.

Volkswagen Korea said its April sales volume was the highest since the company started business in 2005.

The popularity of diesel and fuel-efficient engines continued.

The situation is not nearly so bright for Korean automakers, with the top five selling 118,829 units in April, a mere 1.24 percent increase from a year earlier.

“Because of each brands’ aggressive promotion, such as at the Seoul Motor Show, and securing enough product volume, more imported cars were registered than the previous month,” said Yoon Dae-sung, executive managing director at Kaida.

To further boost sales, foreign brands are offering various promotions this month, but among them, Japanese carmakers are moving particularly aggressively on the back of a weak yen.

Toyota Korea, which took fifth in April sales, on Monday said it will offer a 3 million won ($2,700) discount on the Prius, Camry and Camry Hybrid this month.

Honda Korea also said that it will give 1 million to 1.5 million won worth of coupons to buyers of the Accord, while the Civic Euro and CR-Z will be discounted 3 million won and 5 million won, respectively.