Samsung Electronics’ Galaxy S4 is on display during its March launch at Radio City Music Hall in New York. [REUTERS/NEWSIS]

Samsung Electronics is already the world’s No. 1 smartphone producer, but it may be able to outpace Apple even in profit in the handset business in the second quarter, according to a U.S. investment research firm.

In a report on Monday, Canaccord Genuity said Apple captured 57 percent of profit in the mobile phone business, followed by Samsung at 43 percent in the first quarter of this year.

During the same period a year ago, Apple had 74 percent of sales, compared to 26 percent for Samsung.

Michael Walkley, a senior analyst with the firm, predicted in the report that in the April-June period, the slowing popularity of iPhone added to the robust sales of Galaxy S4 will propel Samsung to the top spot in profit.

In the quarter ended March 31, 37.4 million iPhones were sold, according to another market researcher, Strategy Analytics, up 7 percent, the smallest increase since the Apple phone debuted in 2007.

During that period, the global smartphone market grew 36 percent; in the first quarter of 2012, iPhone sales surged 88 percent year-on-year.

Kim Ji-woong, an analyst with Seoul-based ETrade Securities, says the second quarter will give an edge to Samsung over Apple, “given the lack of any new mobile device from the U.S. tech bellwether.” 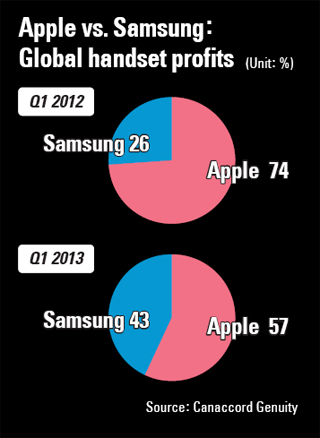 According to industry rumors, iPhone 5’s successor 5S will likely be delayed later than July, as was previously expected. Kim forecasts Samsung will sell 8.2 million smartphones in the second quarter, 18 percent more than in the previous three months, although there are “some concerns over the success of Galaxy S4.”

Analysts are increasingly asserting the need for Apple to follow in the footsteps of Samsung when it comes to its product lineup. And rumors already abound about a bigger iPhone, a cheaper iPhone and a plastic iPhone.

Samsung’s strategy of sporadically diversifying its products in terms of size, function and even color has proven critics wrong. Its Galaxy Note phablet series has been hugely popular since it was introduced in October 2011.

The 5.5-inch Galaxy Note 2 sold over 5 million in just two months after its release, according to Samsung in November.

Inspired by the global trend of smartphone screen sizes getting bigger, Apple for the first time enlarged the size of its display to 4 inches from 3.5 inches for the iPhone 5 released in December. And Apple believes the iPhone 5’s size is the “most advanced screen in the industry.”

When asked during an earnings call in January if Apple was worried about competing with larger smartphone screens from other phone makers, its CEO Tim Cook said, “No one comes close to matching the quality ... We don’t sacrifice the one-handed ease-of-use our customers love.

“We put a lot of thought into screen size and feel confident we picked the right one.”