The lessons of an aging Japan

The lessons of an aging Japan 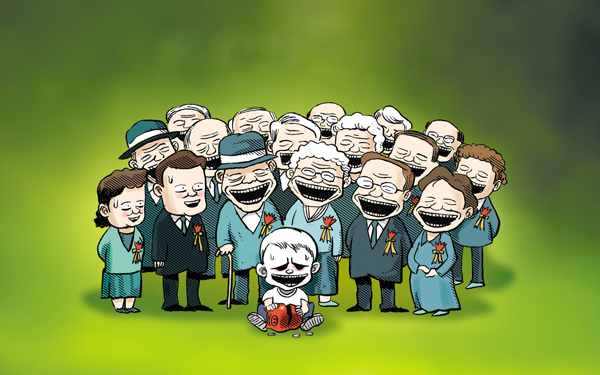 Renowned Japanese journalist Yoichi Funabashi’s Rebuild Japan Initiative Foundation recently published “Japan’s Worst-case Scenarios: The Nine Blind spots.” The report analyzes nine major security crises Japan faces, and one of them is “declining population.” While it is a virtual scenario, the report assumes an extreme situation in 2050, when the low fertility rate and aging of the population worsens generational discord and young people plan terrorist attacks against the older generation, who receive most of the benefits. As the birthrate drops, the number of young people is shrinking while a longer life span increases the elderly population. The trend results in serious structural problems in politics, economy, society and security.

Japan has already entered the post-aged society, with more than 20 percent of the population over the age of 65 as of 2007. According to the estimate of the National Institute of Population and Social Security Research, the aged-population rate of Japan will grow from 23.3 percent in 2011 to 36 percent in 2040. Especially the rural regions will suffer extreme aging, over 40 percent. It means two young people need to support one senior citizen.

The Dankai Generation - Japan’s baby boomers born between 1947 and 1949 - played a major part in Japan’s rapid economic development, but as they are retiring, the society is graying rapidly. The aging of the society results in an imbalance of wealth between generations, a decrease in spending and an increase in welfare costs. It also lowers the fertility rate of the younger generation, leading to the vicious cycle of accelerating the aging of society.

The low birthrate and aging population are considered the main cause of deflation Japan has been suffering for the last two decades. The high income-earning older generation is refraining from spending to prepare for retirement, and the young generation that should be spending money on marriage and childcare are poor, and the imbalance creates a slump in domestic demand.

After all, aggravation of a low birthrate and aging is a time bomb that slowly undermines the economic capacity of a country. The damage is slowly snowballing, ruining the vitality of the society. A shrinking production population also weakens growth potential.

In addition, decreasing population in rural areas weakens the function of local communities. Half of Japan has already become extremely depopulated, making it harder to provide basic services such as security, fire-fighting, education and medical services, and threatening the existence of the community altogether.

What about Korea? In 2011, Korea’s aging rate was 11.3 percent. By 2017, it will reach 14 percent, officially becoming an aged society. The aging rate is faster among the members of the Organization of Economic Cooperation and Development, and Korea is likely to become a post-aged society with an over-20-percent aging rate. The dark shadow of aging is directly in front of us. While Japan entered the aged society after accumulating wealth through rapid economic development, Korea has to face aging when the per-capita national income is still at the low $20,000 level.

While the Korean government has created and implemented the first and second plans for the aging society and population, we should draft and execute a more comprehensive program. Yet, we need an aggressive response across the nation and society beyond the government policy.

Basic policies to boost birthrate should be accompanied by assistance for the elderly. Reinforcing female employment is expected to bring immediate effects. In Norway, social participation of women brings an economic impact as strong as huge revenues from oil exports.

Low birthrates and aging populations have become a general trend in Asia. We can create diplomatic assets by establishing a policy cooperation channel with Japan - which has already implemented various measures in response to the aging population - and spreading the plan across Asia. With such high dependency on trade, Korea cannot afford to let Asia lose vitality when it should be a growth engine of the global economy. We need to seek an active role in regional cooperation to cope with the aging problem.

*The author is the Korean ambassador to Japan.