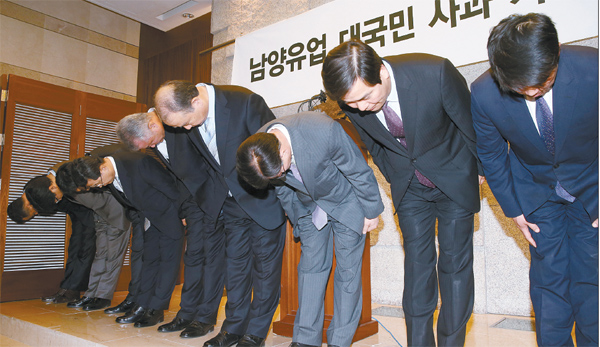 Namyang CEO Kim Woong, fourth from right, and other executives bow after a press conference yesterday in central Seoul. [NEWSIS]

The CEO of Namyang Dairy Products, the object of nationwide scorn after an abusive, foul-mouthed salesman strong-armed a distributor, held a press conference yesterday to issue a public apology and announce measures to compensate its network of distributors.

Yet, associations of retailers gave the executive a frosty reception.

But that might not be enough to appease retailers.

After an audio file of a phone conversation between a young Namyang salesman and a distributor emerged on YouTube last Friday, the nation’s largest producer of dairy products has been the target of a public outcry and boycotts.

In the recording, the sales representative hurls insults and threatens a distributor who refuses to buy more product than he thinks he can sell.

More than 150 associations of small business activists and self-employed store owners said yesterday that about six million mom-and-pop stores would suspend sales of Namyang products if the company does not make restitution for material and mental damage it caused. A coalition of 15,000 convenience store owners also announced a boycott earlier on Wednesday.

At the press conference, Namyang CEO Kim Woong admitted the aggressive sales practice of one of its sales representatives was wrong and pledged to improve the system.

“We acknowledge there have been coercive sales practices. We sincerely apologize about the series of events that provoked public criticism,” said Kim.

To compensate the victims, Namyang promised to withdraw a lawsuit against the council of independent retailers, expand the sales field, provide interpersonal training to employees, establish a mechanism to address complaints from retailers and raise 50 billion won ($45 million) for a shared growth fund.

Namyang earlier sued the council of independent retailers for spreading false information about the audio file and the incident.

However, because executives of Namyang denied they encouraged aggressive business practices or had knowledge of them, associations of small business activists and retailers criticized the apology as lacking sincerity.

“We neither instructed employees to conduct such business practices nor did we know about such incidents,” said Kim.

When asked whether the company set unrealistic sales goals, Kim said, “We set reasonable sales by considering the performance of the previous year, demographics, the distribution map of retailers and economic growth rate.”

The retail industry blasted the apology, saying executives’ claim that they had not known about what happens at branch offices and in the field was nonsense, and Namyang does not recognize the severity of the situation.

“It does not make sense that coercive practices threatening distributors to achieve sales results just happened at branch offices. It is more likely it has been either ordered by management or happened under tacit consent of the management,” said an independent retailer.

Yesterday afternoon, associations of small business activists held a press conference in front of Namyang Dairy headquarters saying they will continue their efforts against Namyang, including boycotts.

The Namyang CEO visited the site and apologized to protesters, but was rejected.

“Without a word of apology to us, the victims of such incidents, it apologized to the public. It is not a public apology; it’s just a public show,” said one protester.

Meanwhile, the government’s Fair Trade Commission stepped up its investigation, saying it will get to the bottom of the issue, adding that regional distributors had filed complaints against Namyang in January and April. The distributors claimed Namyang manipulated a computer order system to force them to increase purchases.

“We will actively cooperate with the ongoing investigation by the prosecution and the Fair Trade Commission and create an institutional system to block unjust sales practices,” said Kim at the press conference.