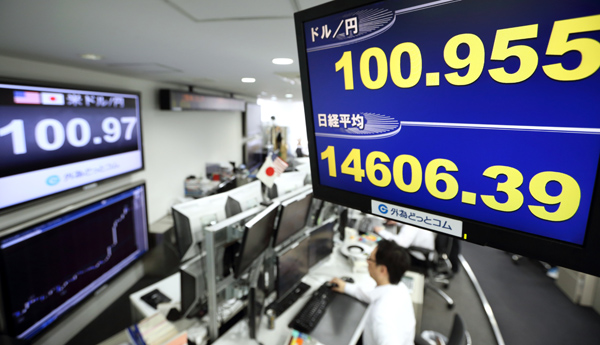 Monitors display the exchange rate of the yen against the U.S. dollar, top right and at left, and the Nikkei 225 Stock Average figure at a foreign exchange brokerage in Tokyo, yesterday. The yen is poised to weaken even further versus the dollar after breaking a key support level at 100 for the first time in four years, trading patterns show. [Bloomberg]

For the first time in four years, the value of the Japanese currency depreciated to 100 yen to the U.S. dollar on Thursday in New York, a result of Prime Minister Shinzo Abe’s aggressive expansionary monetary policy.

The continuing weakening of the yen, which analysts predict to continue for a while, is reinforcing concerns about a Korean economy overly dependent on exports. The Korean stock market plunged yesterday on the currency news.

“The 100 yen per dollar level was broken as a result of Japan’s loosened monetary policy and growing expectations that the U.S. economy is on a track to recovery,” said Shin Sung-ho, director of research at Woori Investment & Securities. “The value of the Japanese currency will continue to depreciate as the Japanese government has proclaimed it will continue its stimulus policy.” 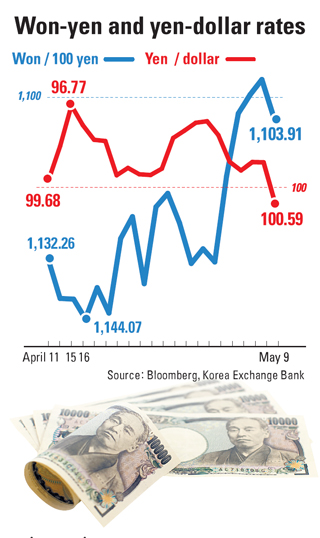 On Thursday, the U.S. Labor Department said that unemployment claims dropped to the lowest number in more than five years. There was also news recently that 165,000 more jobs have been added to U.S. payrolls.

The term “Abenomics,” which refers to Abe’s increased government spending and loosened monetary policy, was coined last November when Abe suggested that Japan’s central bank print an “unlimited” amount of yen to help cope with deflation and to salvage an economy that has suffered from extremely low growth. Saving the economy was the pledge that helped Abe’s Liberal Democratic Party win the general election last year.

After he became prime minister in December, the Bank of Japan set a target inflation rate of 2 percent in two years and said it will double its monetary base in two years as part of quantitative easing measures.

The yen’s fall was vividly seen against the dollar in recent months.

Last September, the value of the yen was around 77 yen against the U.S. dollar, but this month, the yen depreciated and remained in the higher 90 yen level.

As a result of the weakened yen, Japanese manufacturers are gaining price competitiveness over rivals in overseas markets, and that has fueled the stock market.

Japanese electronic companies like Sony have returned to profit while Japanese automakers are also enjoying a boost in overseas sales. Japan’s Nikkei stock average went up 2.93 percent yesterday to 14,607.54, the highest since January 2008.

Korean shares were hurt yesterday by the yen’s decline.

The benchmark Kospi plunged 1.75 percent to close at 1,944.75 on the Seoul bourse yesterday despite the Bank of Korea’s unexpected move on Thursday of lowering the key interest rate by 0.25 percentage point to 2.5 percent. On the day the monetary policy committee lowered the interest rate, the Kospi index jumped by more than 20 points.

Yesterday, shares of automakers Hyundai Motor and Kia Motors plunged. Hyundai went down 2.33 percent to 189,000 won, and Kia fell 3.34 percent to 52,100 won. Korean automakers are seen as major victims of Abenomics as they directly compete with their Japanese rivals in the global market.

“When it comes to automobiles, Japan already had competitiveness in quality,” said Lee Chul-hee, an economist at Tongyang Securities. “The weakening yen is adding to that competitiveness, and Korean automakers for the time being will be put under a comparative disadvantage.” Lee predicted the weak yen will continue for several years.

The minor Kosdaq index, which has been enjoying a strong market, also fell 0.64 percent to close at 569.7 yesterday. The won-yen exchange rate also fluctuated yesterday, falling below the 1,100 won per 100 yen level.

Most analysts say there is nothing Korea can do to fight the falling yen but to just wait it out and help companies that are suffering.

“There is really nothing Korea can do as a countermeasure,” said Seo Dae-il, a senior researcher at KDB Daewoo Securities. “For some time, it will be best for Korea to monitor the weakening yen trend and for the government to help companies in financial need.”

Though some analysts note that Korea could weaken its own currency against the U.S. dollar, there are concerns that such a move could fuel inflation and depress domestic consumption, which could further hurt the Korean economy.

There are also suggestions that Korean firms and financial institutions learn to deal with currency fluctuations so they become less vulnerable in times of unstable global economics and exchange rates.

“Private companies should be more defensive in operations so they are less affected by the fluctuations in exchange rates,” said Yang Jun-sok, an economics professor at Catholic University.

Though Abe’s expansionary monetary policy is giving a boost to manufacturers, there are also concerns that once the global economy recovers and crude oil and natural gas prices jump with higher international demand, consumer prices in Japan could rise sharply.