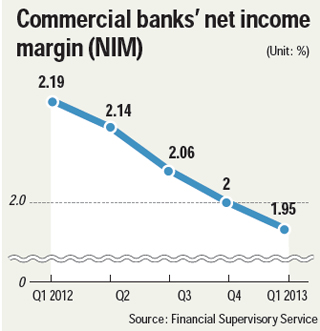 Last week’s lowering of the benchmark rate by the Bank of Korea will reduce interest payments on debt by 1.8 trillion won ($1.6 billion) annually, the Financial Supervisory Service reported yesterday.

The central bank on Thursday unexpectedly lowered the benchmark rate from 2.75 percent to 2.5 percent after the National Assembly passed a 17.3 trillion won supplemental budget to stimulate to the economy.

The Ministry of Strategy and Finance projected the supplemental budget will help raise GDP by 0.3 to 0.4 percentage point, while the BOK said lowering the benchmark rate would make a difference of 0.2 percentage point.

While the Finance Ministry projects this year’s economic growth at 2.3 percent, the central bank’s outlook is more optimistic at 2.6 percent.

The news is welcome not only for debtors but also the stock market and businesses that can be expected to benefit from improved consumer sentiment.

“As the monetary stimulus has been added on top of the government’s supplemental budget, it will have a positive influence on consumer spending and corporate investment,” said Lee Sang-jae, Hyundai Securities economist. “Especially when looking into the profit rates of companies in times when the benchmark rate was lowered, domestic sectors like health care performed well.”

In contrast, banks are expected to suffer, particularly with profits falling and insolvency rising.

Banks net income margin (NIM), another indicator of profitability, fell sharply to 1.95 percent in the first three months of the year. This is the lowest since the third quarter of 2009 when the NIM was 1.91 percent.

Meanwhile, the FSS in Thursday’s report estimated that by the end of March, the insolvent bond ratio of commercial banks stood at 1.46 percent. This is up from 0.13 percent from the previous quarter. The total amount of insolvent bonds is estimated at 20.5 trillion won, a 2 trillion won increase.

Others argue that the impact of the lower interest rate will likely be limited.

The FSS in yesterday’s report said banks’ profitability is unlikely to be significantly influenced by the rate cut. It said the net profit on interest income will shrink 120 billion won this year, only 1.4 percent of the 8.7 trillion won that commercial banks made in 2012.