Dongdaemun commercial district, the fashion mecca of Korea in Jung-district, central Seoul, is alive with lights and shoppers. At right is Design Park, scheduled to open next March. [JoongAng Ilbo]

“Tourists from China, Hong Kong and Taiwan are 80 percent of our total sales,” said Jung Ha-na, sales manager at Hoze. “And sales at the Dongdaemun store are much higher than at the store on Garosugil in Sinsa-dong, the most fashion conscious and trendy street in Gangnam,”

Blooming, another clothing store on the first floor of Doota, was also crowded with Chinese tourists busy picking clothing items made of white lace.

“I enjoy shopping in Dongdaemun as most fashion items are about 40 percent cheaper than in department stores. At the same time Dongdaemun shopping malls have uniquely designed clothes,” said 38-year-old Chen Zhu-ran from China.

Left: A food court designed by Karim Rashid in the Lotte Fit In shopping mall, which opens at the end of this month. Right: All the restrooms at Doota shopping mall have powder rooms.[JoongAng Ilbo]

With Chinese shoppers and the so-called Korean Wave, Dongdaemun commercial district is hopping like it hasn’t since its heyday in the 1990s and early 2000s.

At one time there were more than 10,000 clothing stores, but the number shrank to 3,800 as many young customers turned away to cheaper and more convenient online shopping malls.

In recent years, however, Dongdamun has been changing, becoming bigger and more advanced.

Serving as the gateway for independent designers, it has succeeded in differentiating itself from online stores, where there is little variety in the clothes from site to site.

Chinese tourists and women in their 20s and 30s have supplanted the teenage customers of the past.

Doota, which opened in 1999, is the most representative shopping complex in the commercial district and that led the revival of Dongdaemun. 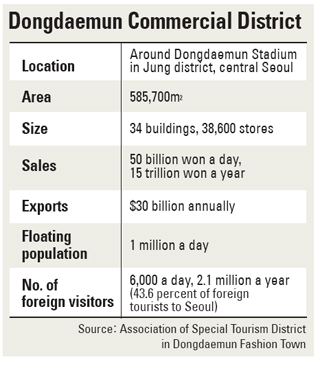 Its interior design outshines that of many department stores. On the fifth and sixth floors, there are bathrooms for kids. In all bathrooms, there is a powder room.

The corridors 2.5 meters (8.2 feet) wide are similar to those of department stores, allowing ample room for a pleasant shopping experience.

Signs that read “Doota goes strictly by the price tag system without discounts,” which were everywhere until a few years ago, are almost invisible now as most customers are familiar with the fixed price system.

Over the past five years, Doota, which had 2,000 stores when it opened, reduced the number of stores to 500 and nearly quadrupled the average area per store from 5.2 square meters (56 square feet) to 20 square meters.

It also introduced an interpretation system, using three agents whom storekeepers can call.

Its reputation for having only cheap copies of famous clothing brands and designers is also changing. Most of the small, independent designers on the first and the second floors make 50 pieces of clothing at a time.

“When you shop at online malls, you see a lot of people wearing similar clothes on the street, but when you buy clothes from Doota, there is no need to worry about that,” said Na Young-hee, a 28-year-old shopper.

The shopping mall Fashion TV, which has been as empty as an old house since completed in 2007, is opening as Lotte Fit In at the end of this month.

Lotte Asset Development received the rental agreement from the 1,500 store owners behind Fashion TV. Based on the 20-year, long-term lease contract, Lotte Asset Management will operate the shopping mall.

Sixty percent of the stores will carry new brands that existing department stores do not have, thanks to the independent designers and large wholesalers who have long settled in Dongdaemun area. It also has a food court on its seventh floor designed by Karim Rashid.

Every store has its own fitting room, and on the fifth floor there is a stage where independent designers of Dongdaemun can hold fashion shows.

It will implement the fast fashion system, with new inventory arriving twice a week.

Lotte Fit In is a new concept shopping mall, where prices are 40 percent cheaper than department stores and 60 percent lower than outlets and designs reflect the latest trends.

“We aim to implement department store services such as the price tag system and integrated mileage service, while at the same time making the price lower than outlets,” said Lim Hyung-wook, marketing director at Lotte Asset Management.

The competitiveness of Dongdaemun is perhaps its biggest draw.

“There is a reason why we opened a shopping mall in Dongdaemun in spite of the hardship of receiving consent from individual store owners of Fashion TV,” said Kim Jae-hwan, Dongdaemun’s Fit In manager. “In Dongdaemun, the planning, production and sales of fashion items are achieved within two days. There is nowhere else in the world with a system that allows you to select an item at 9 a.m., make an order, complete the purchase of raw and subsidiary materials by noon and provide finished goods to the warehouse by 5 p.m. the next day.”

He explained that this is how the shopping malls in Dongdaemun can showcase a variety of new designs at low prices.

The winds of change are also blowing through the wholesale commercial area of Dongdaemun. U:US fashion mall is a wholesaler, but it is equipped with a guide service in English, Japanese and Chinese.

Its ceilings are 20 percent higher than existing shopping malls so the stores look much larger.

The commercial district is expected to be even more active next March when 60,000-square-meter Dongdaemun Design Park opens in the old Dongdaemun Stadium.

The design park will include a design museum, a business center where fashion-related businesses can interact and an art hall.

“Places like Dongdaemun, where fashion design, production and material related companies are gathered are rare,” said Kim Sung-yeop, CEO of Style On Me, a fashion company based in Dongdaemun.

“Whether these strengths can be upgraded to stand out in the competitive local and international fashion industry is a key question for continued growth.”