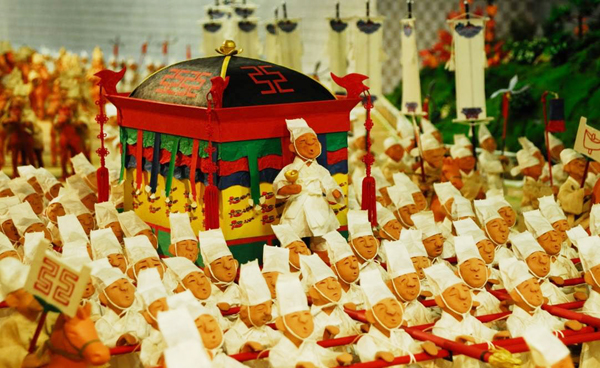 A popular exhibit at the museum is a miniature replica of the state funeral for King Jeongjo. Provided by the museum

YONGIN, Gyeonggi - People rarely associate death with fun, but at the Yearee Life in Museum, dying is a celebration.

Opened only last month, the institution is quite unique for its exclusive focus on studying funerals and other death rituals.

Its opening is timely as the “well-dying” trend catches on across the nation. As an extension of the “well-being” movement to live happier and healthier lives, well-dying followers focus on dying with dignity - a topic of particular importance as Koreans live to be much older that ever before.

The museum opened with a vision to help people better prepare for death. While glorifying funerals, it also attempts to help people experience Koreans’ courtesy and fidelity about death. In addition, international exhibits introduce funeral culture from around the world.

Although the museum is new, it has been in the works for 10 years. Sampo Silver Dream, a company that makes goods used at funerals, has been collecting artifacts to display for years. 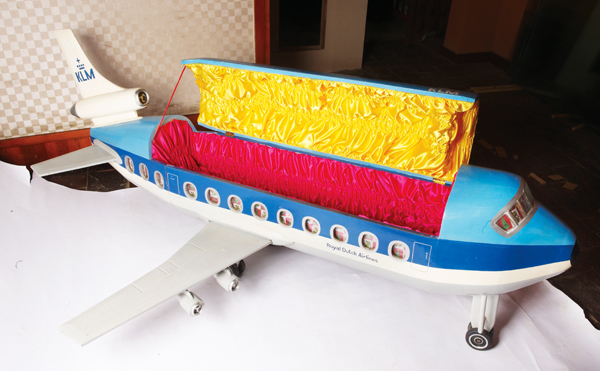 This airplane-shaped coffin is from Ghana. In Ghanaian culture, it is customary for the coffin to represent a memorable experience of the deceased.

It was Im Jun (1950-2006), the CEO of Sampo Silver Dream, who dedicated the latter years of his life to collecting materials for the museum. As he died during preparations for the death museum, it’s only natural that his descendents have special affection toward the institution.

“Whenever he heard there was a good artifact, he wouldn’t hesitate to travel far to retrieve it,” said Im Ho-yeong, director of the museum and Im’s son. “I will work to make this a place where people can accept death with gratitude and a relaxed mind.”

The first area showcases some 5,000 artifacts from funerals in Korea, Japan, China, Mongolia and other places.

And a look around shows that no matter where you come from, your thoughts about death do not differ much. For instance, many of the decorative items for coffins look alike in terms of shape and color, making you think there is fairness in mankind at a human’s final moments.

Officials say that the museum worked extra hard on the Korean Culture Zone. Its key exhibit is a miniature replica of the state funeral for King Jeongjo (1752-1800). It consists of 1,384 figurines, 20 palanquins and 6,000 outfits - all made by hand over two years.

The special exhibition on the funeral culture of modern Africa is also drawing attention from visitors.