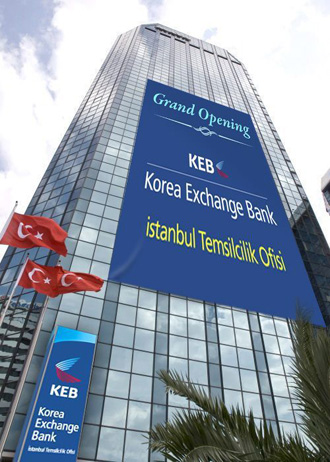 A sign announces the opening of Korea Exchange Bank’s office in Istanbul. The bank is planning new offices in Indonesia, the Philippines, Japan, China and India. Provided by the bank

With its Istanbul office now open for business, the bank say it has the largest overseas network with 53 offices and branches in 23 countries.

Among Korean banks, KEB has the largest sales network in Europe, including branches in London, Paris and Moscow.

The bank said the opening of its office in Istanbul was a significant change from when management was under Lone Star and the expansion of its overseas network stalled.

Lone Star, which was the largest shareholder of KEB, sold its stake to Hana Financial Group in 2012.

The opening of the Turkey office is the bank’s first overseas expansion since it joined Hana Financial Group.

“The Istanbul office opening is the first overseas expansion that the bank has made in five years after it opened its office in Ostrava in the Czech Republic,” said KEB President Yun Yong-ro, who visited Turkey for the opening ceremony. “It was carefully planned from the beginning to meet the demand for changes in management paradigms in financial institutions as well as to create a new profit source.”

The bank is also planning to open offices in Indonesia, the Philippines, Japan, China and Chennai, India, by the end of this year.