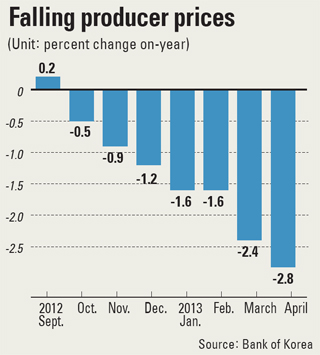 Producers’ prices saw the sharpest drop in three and a half years as the Korean won appreciated against the U.S. dollar on the back of the weakening Japanese yen and a mild economic recovery in the U.S.

Although lower producer prices are good news for the average household budget, signaling cheaper goods, they also are a sign that the economy is headed toward decelerating growth.

In fact, with the economy suffering flat quarter growth and consumer price growth below 2 percent, there are concerns of Korea going into a deflationary period similar to the one Japan has been struggling with for more than a decade.

According to the Bank of Korea yesterday, producer prices last month fell 2.8 percent compared to a year ago.

This was the sharpest fall since October 2009 when the producer prices tumbled 3.1 percent compared to a year earlier. After dipping 0.5 percent on-year in October, producer prices have been falling for seven consecutive months.

Even when compared to March, producer prices were down 0.3 percent last month.

Manufactured goods’ prices on average were 4.8 percent lower. The producer price of fresh produce and marine goods slid by 8.2 percent.

Meanwhile utility costs including gas and electricity were up 6.5 percent.

Consumer prices have been growing at a 1-percent rate since November. This is a turnaround from the previous year when inflation was the biggest concern. As the Japanese government pushed to weaken the yen and revitalize its economy, the outlook for Korean economic growth was revised downward by many institutions.

The Park administration has recently taken action to boost the economy including a 17.3 trillion won ($15.5 billion) stimulus budget while the central bank earlier this month lowered the key interest rate for the first time in seven months from 2.75 percent to 2.5 percent.

Central bank governor Kim Choong-soo in April said inflation might recover once the economy picks up from the stimulus package and the slow but steady comeback of the global economy. He speculated that consumer prices could go up by 3 percent by the end of this year. The central bank’s inflation target is between 2.5 and 3.5 percent.