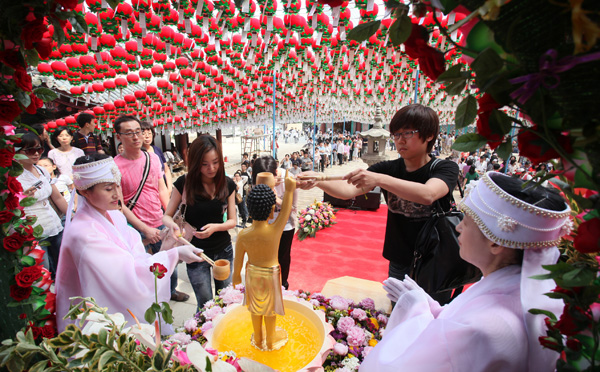 Historical records say it was around the year 372, during the Goguryeo Kingdom (BC 37 - AD 668), that Buddhism was introduced in Korea. But as many people know, it was during the Unified Silla and Goryeo eras - during which Buddhism was legally declared as the state religion - that the religion really flourished.

Although it is not something that concerns Buddhism only, some critics say there is a growing mistrust of Buddhist religious leaders. In fact, some insiders in Buddhist circles say they’ve been predicting a decrease in the number of Buddhist believers.

In particular, Korean Buddhism experienced some of its lowest points in the past several years when some of its monks were embroiled in gambling scandals during the administration of President Lee Myung-bak, a devout Christian.

Nonetheless, few can deny that Korean Buddhism has been playing a crucial role in promoting Korean culture abroad - which is something that the current government vowed it will work on harder.

Temple stay programs, which celebrated their 10th anniversary last year, have become one of the main tourist attractions in Korea. Temple food restaurants are also gaining traction not just at home where there is an increased interest in healthy food and lifestyle, but also overseas. Books on curing souls written by respected monks have been on best sellers’ lists for weeks.

As Korea celebrates Buddha’s Birthday today, the Korea JoongAng Daily examined some of the Buddhist festivities and traditions that have been practiced for years and emerged as key cultural parts of Korean Buddhism. 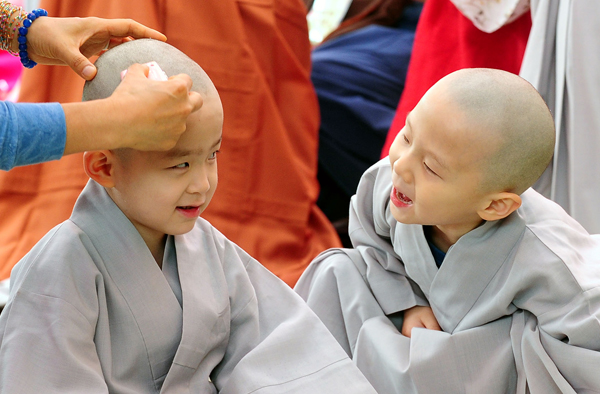 In Buddhism, a boy monk is a symbol of purity and it’s believed a “childlike mind” is the quintessential Buddhist mind.

In Korea, there is a tradition called “boy monks’ head-shaving ceremony” about a month before Buddha’s Birthday.

It is held in temples across the peninsula. A group of about ten boys - between ages 5 and 7 - shave their heads like the real Buddhist monks, wear gray robes and live with the monks for a month, learning Buddhist teachings and leading the lives considered good in the eyes of Buddha.

The scene is so cute - with some boys crying loudly, resisting the head-shaving, and others enjoying the whole process, making funny, mischievous faces and poses for the camera, that they are featured not just in Korean media but also some foreign media. Although their major duty is learning Buddhist ways, they are also seen in media photos playing traditional recreational games as well as soccer.

The boys are often from Buddhist believers’ families and encouraged to take part by their parents as part of character discipline.

After the head-shaving ceremony, the Buddhist initiation ceremony takes place. The boys are first each given a Buddhist name. And then they are given five commandments they should abide by for a month: One, they would love all living things; two, they would care for other people’s possessions; three, they would use refined language and say right things; four, they would be good to their friends; and five, they would obey what the monks, teachers and parents say.

“I wanted to make a good memory and experience for my son,” said Mun Gyeong-suk, a 38-year-old mother whose son took part in the ceremony at the Daegwaneum Temple in Daegu. “Although it’s only for a month, I hope he learns from the lives of the monks and becomes the kind of person that cares for others when he grows up.” Officials say the experience, called “short-term Buddhist priesthood” in Korea, helps children learn about the concepts of sharing and filial duty. 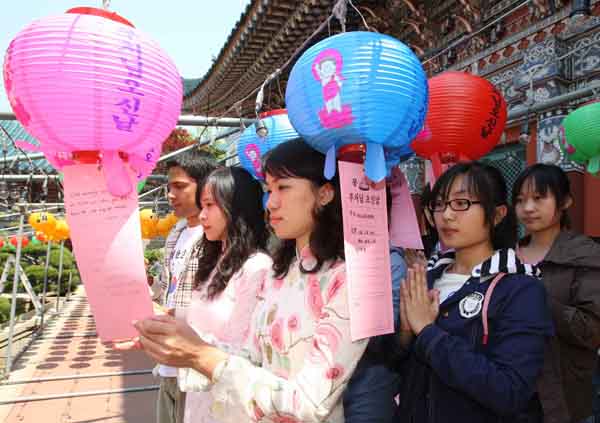 Every year, in the days leading up to Buddha’s Birthday, temples across the Korean peninsula are adorned with countless lanterns.

Together they create something like a huge canopy, or in some cases a large tunnel, offering quite a surreal experience to stand beneath them or gaze at them, particularly on a clear day under the blue skies. The scene is a favorite of photographers around this time of the year.

When you look closely, you will notice the lanterns have names on them as well as wishes. The paper is called “wishing paper.”

Buddhist believers pay a certain amount of money for the wishing paper. The cost can be as affordable as 10,000 won ($8.96) or as expensive as over 100,000 won. The amount of money is translated into the size of the lantern. In other words, the more you pay, the bigger your lantern will be. In fact, it is unclear just when and how this tradition originated. Kim Yeong-deok, a Korean literature professor at Hanyang University who has been studying Buddhist lanterns for years, said that “although it’s unclear when this custom began, there was a custom of hanging paper decorations in Korea’s traditional culture from a long time ago.”

He, as well as the officials of the Jogye Order, Korea’s largest Buddhist sect, says that it appears there is no such tradition in other countries. “In some parts of China, people put up lanterns. But they do not attach wishing papers,” they say. “In Japan, there is a tradition of hanging fortune papers on a tree, but not on lanterns.”

The tradition of wishing lanterns has evolved over time. Although they were first made of hanji, traditional Korean paper made of mulberry trees, today only those that decorate the inside of the buildings are made of hanji. The rest are made of artificial cloth that is more water-resistant, as many of the lanterns are set up outdoors. 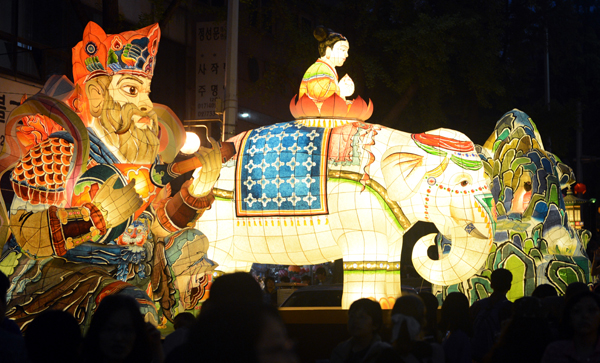 There is another Buddhist cultural activity around Buddha’s birthday that involves lanterns: the Lotus Lantern Festival, otherwise known as Yeondeunghoe.

One might wonder by now, just what is the significance of lanterns in Buddhism?

There is a tale that in the days of Buddha, a poor woman who wanted to make an offering to Buddha cut her hair and got some money. With it, she bought a small, humble lantern and lit it up in his temple. Other wealthy followers bought large, colorful lanterns and dedicated them to the temple. A night came, and temple officials tried to turn the lanterns off. All were turned off, except the one offered by the poor lady. Buddha explained to them the story behind the seemingly worthless lantern, and the moral is that devotion and commitment are much stronger and praised more than outside beauty and the size.

The nine-day festivities consist of various activities like exhibitions, cheer sessions, and cultural performances, but its highlights are always the lighting ceremony of the huge lantern in a public square and the parade in which tens of thousands of people walk the streets of downtown Seoul - all holding the lanterns they have made for that day.

“This year, some 50,000 people took part in the parade alone, and some 100,000 lanterns were lit up for the festival,” said Yang Won-june, one of the publicists for Jogye Order. “Every year, the festival is evolving into something more than just a religious activity. As it was only last year that the festival was recognized as a state-designated cultural heritage, we believe it will be a festival that embraces people of more religions and social groups in years to come.”

The interesting part in this year’s edition was that it adopted light-emitting diode (LED) lanterns. LED lanterns are much more costly but they are reusable for years with new batteries. Also, they pose a lower risk of fire and are more comfortable to carry without wax drippings. “This year, only 50 percent of the lanterns were LED lanterns, but that percentage will increase every year,” Yang said.