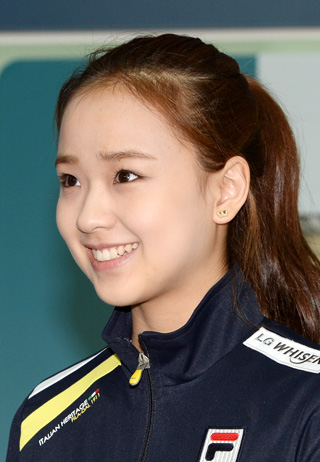 Son Yeon-jae finished fourth in the all-around competition at the World Cup competition in Minsk, Belarus, on Saturday, as the Korean rhythmic gymnast continued her strong form this season.

Son received 70.5333 points in total behind third-place Melitina Staniouta of Belarus, who collected 71.3 points. Yana Kudryavtseva of Russia won the event with 71.55 points followed by Daria Svatkovskaya of Russia with 71.3333 points. It was the second time in a row that she had a fourth-place all-around finish, her best result so far, at a World Cup event. She recorded that result first in Sofia, Bulgaria, on May 4.

Son received the sixth-most points or better in each rhythmic gymnastics discipline, making it to the eight-person finals in all four individual events slated to be held late last night Korean time. This is also the second time in a row that she made it to all four apparatus finals.

She failed to earn a podium finish in the other three disciplines in Bulgaria, finishing last in the ball final, second-last in the club final and in fifth in the ribbon final. Son, who became the first Korean Olympic finalist in rhythmic gymnastics with her fifth-place finish at the 2012 London Olympics, won the national rhythmic gymnastics team qualifier on May 10, earning the right to represent the country in the Asian championships next month and the Summer Universiade in July.