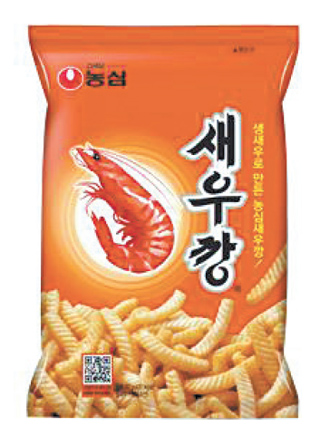 Saewookkang, the airy shrimp-flavored crackers that go so very well with beer, have sold 7.5 billion bags since their debut in 1971, its producer Nongshim, a local food and confectionary company, said yesterday.

The sales mean that every Korean, based on a population of 50 million, has bought 150 of the 3.2 ounce bags of Saewookkang. If you spread all 7.5 billion bags out, they would cover all of Asia’s 4.4 billion hectares, the company said.

Nicknamed Korea’s “national snack,” Saewookkang has a famous commercial jingle that every Korean knows, with the lyric that goes, “Your hands keep going [to Saewookkang]” - similar to the Pringles’ “Once you pop, you just can’t stop.”

“We believe Saewookkang maintained its status as one of the most beloved snacks of Koreans because of the taste and quality,” said a Nongshim spokesman. “We will continue exerting efforts to extend its reach for 100 to 200 years.”

Similar to the traditional shrimp crackers of Southeast Asia, the Korean snack now comes in different sizes: Mini, weighing 30 grams (1 ounce), and a bag for use at noraebang, or karaoke, 400 grams.

There is a spicy version and one using rice as the main ingredient instead of flour.

Saewookkang is now exported to 76 countries, although it is best known in Japan and China. It was initially shipped overseas in 1990 and exports have increased 15 times since then.

Initially, Saewookkang was inspired by puffed rice, a Korean traditional snack. Nongshim went through numerous experiments to discover the optimal temperature to fry the snack and optimal texture. The company said it went through 360 tons of flour before getting the product right.