Courts instruct men to keep hands to themselves

Courts instruct men to keep hands to themselves 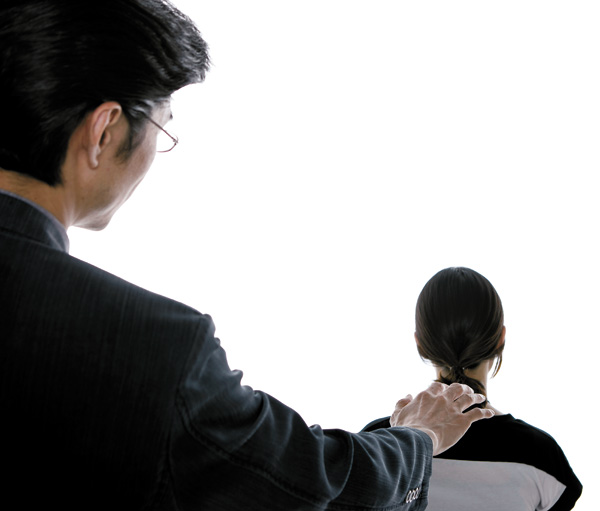 Korean men with wandering hands had better watch out. The country’s courts are starting to strictly punish wayward behavior.

A case in point is the five-month prison term awarded Suh Jong-ryeol, former president of the state-run Korea Internet Security Agency, who was indicted on charges of sexually harassing his secretary. Suh was accused of hugging his secretary, whose identity has not been disclosed, from behind and kissing her on the back of her neck.

Suh claimed he didn’t mean to hug her but simply intended to pat her on the back as a sign of encouragement. He said he stumbled and his forehead touched the back of the secretary’s neck. A court didn’t buy it at all.

“Suh’s claim is not substantiated as it has been proved that the defendant apologized to the plaintiff on many occasions after she protested Suh’s harassment,” said Judge Kim Chang-hyung at the Seoul Eastern District Court before handing down the five-month prison term last Monday. Suh has entered prison and is likely to appeal.

Judge Kim Tae-kyu at the Busan District Court sentenced a 52-year-old defendant surnamed Choi to 10 months in prison in April and immediately put him behind bars after trial for forcibly hugging a karaoke hostess. The 10-month prison term was heavier than the six months requested by the prosecution.

“The defendant does not regret his sexual assault and neither is he aware of the grave nature of his illegal act,” said the judge in his verdict.

In an even more remarkable case, a 48-year-old company worker in Ulsan surnamed Han had an extramarital affair with a 27-year-old coworker surnamed Choi.

They had sex once a week. But the relationship suffered when Han insisted on sex when Choi didn’t want it. After he forced himself on her, Choi told him she wanted to end the affair.

Han threatened to tell other people about their affair.

So Choi went public and filed a rape complaint. The Seoul Central District Court concurred in May 2012 and sentenced Han to 30 months in jail and five years on the sex offender registry.

“Even if the two parties had an affair before, if it is proved that a plaintiff objected to having sex but was forced, a defendant will be subject to punishment,” the court said in its sentencing.