Kim Hee-cheon goes up narrow stairs in a tenement building in Dongja-dong, Yongsan District, Seoul. Kim won a literary prize organized by the Seoul Metropolitan Government for a poem expressing his experience in tenement housing. By Oh Jong-taek

People refer to the Dongja neighborhood as an island within the city of Seoul.

In the Dongja neighborhood, located in Yongsan District, central Seoul, many live in tenement buildings, with up to a dozen people sharing a bathroom.

There used to be a brothel in the area. But in the late 1990s, it simply became Seoul’s Skid Row.

Kim, 57, is one of more than 800 residents struggling in the neighborhood. He lives in a tiny 3.31-square-meter (36-square-foot) room, where he can fill the space just by stretching out his body.

Kim’s room is on the second floor of a shabby two-story building, which has seven rooms on each floor. Kim does not have a kitchen or a toilet in his room. He goes to a community center to take a shower. 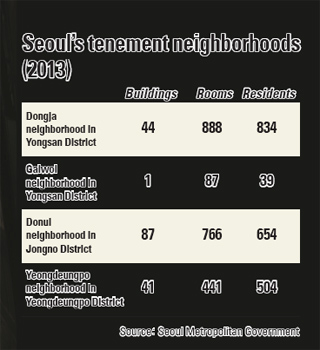 When nature calls, Kim says he urinates directly into a sewer. This is nothing to feel ashamed of as a resident in this kind of place, Kim said.

In contrast to the dire living conditions Kim has been placed in, he once ran a barbecue restaurant in Suwon, Gyeonggi, in the late 1990s.

In 1997, a fire devastated the restaurant, claiming the lives of Kim’s wife and 10-year-old son and leaving his business in ruins.

“I started living as a homeless man around Seoul Station after losing everything in the fire,” said Kim.

Without his family, Kim decided to end his life. He threw his body in front of an oncoming train in September 2007. The train stopped right in front of him.

Kim then found a place in a beehive-like tenement building and began drawing on the government’s basic living assistance payments, receiving 400,000 won ($358.8) a month.

There are 834 people living in the tiny rooms in the Dongja neighborhood.

In a survey conducted last year of 225 Dongja residents, over 60 percent, or 136, said they contemplated ending their lives at least once over the past year. More than half of the respondents, or 53.8 percent, said they were homeless before coming to Dongja.

Though challenges persist, people in Dongja do find hope.

That hope usually comes from a new life.

In 2011, cries of a baby were heard all across the tenements.

It was the first baby born in the town in years. The father of the baby girl is a 56-year-old man surnamed Lee, who used to work for Kia Motors on the assembly line.

Lee told the JoongAng Ilbo he lost three fingers on his left hand while working the line.

After the injury forced him to quit, Lee became an alcoholic.

“I even found out about the death of my parents two years after they had died,” Lee said. “I also thought about committing suicide.”

Lee came to the Dongja neighborhood knowing it was his last refuge before becoming homeless.

At Dongja, Lee met his wife, who is 10 years younger than him, and is now raising three daughters, determined to give them a better life.

“I haven’t drank for a long time,” Lee said. He now works toward his goal of saving 1 million won. That is how much he needs for a deposit to apply for a rental house provided by the Korea Land and Housing Corporation.

Lee told the JoongAng Ilbo everyone in Dongja is determined to save 1 million won to move out of the neighborhood. But saving 1 million won is not as easy as it looks for the people there, Lee said.

Kim met with Lee and heard his sorry. Lee’s strife made an impact on Kim.

A few years ago, Kim came across the dead body of a guy in his 40s in a tent set up in a landfill on a cold winter day. Kim thought he might suffer the same fate. Remembering the feeling he experienced that night, Kim submitted a poem titled “A man in a tent next to a landfill” for a literary prize organized by the Seoul Metropolitan Government.

With the poem, Kim won an excellence award and received 500,000 won. Kim is now a step closer to realizing the long-held dream that he shares with his fellow Dongja residents.